Butler University broke ground Thursday, September 18, on a 1,038-space multi-use parking facility located on the lot behind the Howard L. Schrott Center for the Arts along Sunset Avenue.

Construction of the five-story parking structure, which is anticipated to open in August 2015, will begin this fall. 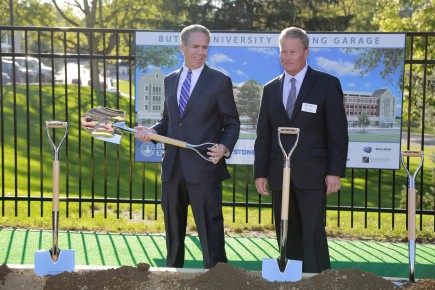 President James M. Danko and Board of Trustees Chair Keith Burks at the September 18 groundbreaking. “It’s another great day to be a Bulldog,” Burks said.

The multi-use facility will include approximately 15,000 square feet of commercial and office space on the ground level.

“This represents a transformation of this area of midtown Indy,” Butler President James M. Danko said at an afternoon groundbreaking ceremony attended by trustees, faculty, staff, alumni, and neighbors.

The parking facility will serve the needs of faculty, staff, and commuter students, as well as event parking demand for Hinkle Fieldhouse, Clowes Memorial Hall, and the Schrott Center. The retail space is likely to house restaurants and businesses catering to both the campus community and surrounding neighborhoods.

The new multi-use parking facility has been in the planning phase for approximately 18 months. In addition to conducting a thorough parking analysis and gaining extensive input from campus stakeholders, the University consulted with the Butler-Tarkington Neighborhood Association, Midtown Indianapolis, Inc., and the City of Indianapolis.

Ted Feeney, President of the Butler-Tarkington Neighborhood Association, said the project will “enhance the workability, bikeability and overall appeal of our neighborhood…. We welcome the continued progress of Butler University.”

The parking garage is one of multiple projects in the works on the east side of campus. The University and City of Indianapolis began work in April on the Sunset Avenue Streetscape initiative, which will improve community safety and way-finding, while beautifying the public gateways to campus. The initial phase of the Streetscape project will primarily involve Sunset Avenue north of Hampton Drive, including a major reconfiguration of the 49th Street curve.