Bulldog Memorial to Be Unveiled During Homecoming

Butler University will unveil a new memorial to its bulldog mascots at the Butler Bowl entrance on Friday, September 26, at 4:00 p.m., as part of Homecoming.

The memorial, which was adopted as a project by the Class of 2013 and became its official class gift, features: 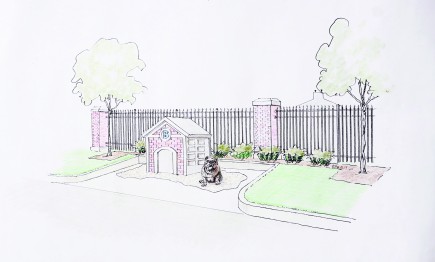 On the side of the doghouse will be a plaque dedicated to the bulldogs that represented Butler in years past, starting with Blue I and Blue II.

The September 26 dedication ceremony also will celebrate the lives of Blue I and Blue II.

“At Butler, the likes of Butler Blue I, II, III, and the bulldogs who have gone before them, are considered to be more than just mascots,” said Michael Kaltenmark, Butler’s Director of External Relations and the owner of Blue III. “Each of our English bulldogs has come to be considered a beloved member of the Butler family during their tenure. Now through the creation of this memorial, we can both honor and always remember their tireless work to proudly represent the University.”

Blue I, who died in May at age 13, began the live mascot program in 2000. She was owned by Kelli Walker, who worked in Butler’s Office of Alumni and Parent Programs from 1998–2004.

Butler Blue I made her inaugural appearance on the court of Hinkle Fieldhouse, carried in the arms of the costumed bulldog mascot (now known as “Hink”). In addition to attending men’s and women’s basketball games—where she rallied with the cheerleaders and the Dawg Pound before retiring to the bleachers to sleep—Blue I attended other collegiate sporting events and made regular visits to classrooms, residence halls, campus events, staff and faculty events, and commencement. At the annual Rejoice holiday concert, she rode a sleigh across stage to the tune of “Blue Christmas.”

Blue II died in September 2013. He was 9. When his death was announced, CBSSports.com wrote, “College basketball lost over the weekend what was arguably its most famous mascot.”