Butler Newsroom > College of Communication > Journalism > Representing Butler, It’s Pearson in the Press Box
Bulldog Memorial to Be Unveiled During Homecoming Take Care of Yourself to Thrive as Teacher 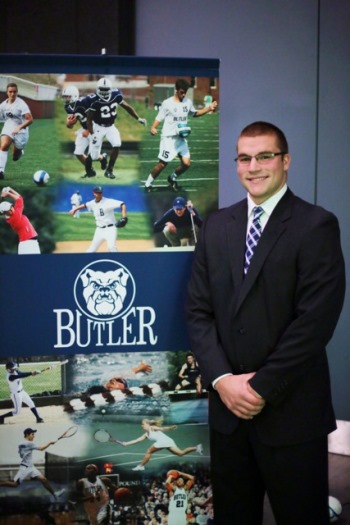 Post-game, he attended a press conference with Colts coach Chuck Pagano and quarterback Andrew Luck. He was even granted access to the Colts locker room where he interviewed Trent Richardson, Dwayne Allen and several other Colts players.

“It was absolutely amazing,” Pearson said. “Being able to cover the game from up top and seeing how professionals handle the NFL really benefitted me. And it was awesome to make connections with the players. Being able to ask your own questions and film your own footage is such an experience.”

Pearson had the opportunity to cover the Colts game through his Sports Media major ­– the newest addition to the College of Communication curriculum.

Sports Media Coordinator Eric Esterline said the degree offers students academic and experiential learning in journalism and production with a special focus on the sports industry.

“It will give students a balance of hardcore writing in journalism and that solid background in media production,” Esterline said. “Whether its producing videos and writing stories for BU:30 or working in event production, we’re excited for students to get hands on experience in what they want to do in the sports industry.”

The major just opened to students this fall, but Esterline said the program has already garnered a lot of interest. He said about 10 Butler students transferred into the major from other fields, and nine freshmen matriculated directly into the program.

Pearson shifted to the Sports Media major from the Journalism program. He said it was an easy decision to make.

“It’s been perfect for me, a guy who has always been involved in sports and has always loved sports,” he said. “It goes hand in hand with journalism, but it is specialized in the one area I have always wanted to go into. There was no doubt.”

Esterline said sports media students enrolled in the BU:30 course, JR407, are assigned two sports beats to cover each semester, one in Butler sports and one in professional sports. He worked this summer to arrange student opportunities with local sports teams like the Pacers, the Colts, the Indians, Indy Eleven soccer and Indy Fuel hockey.

Esterline said the program has an advantage in the experiential opportunities it can provide students.

“Butler will always be linked to the sports industry because of the success of men’s basketball,” Esterline said, “but we also have this great network of professional teams right here in Indianapolis. We’re in a big city where we have the opportunity to cover teams like the Colts or the Pacers. We wanted to get students involved in that.”

Pearson said it was an amazing opportunity to cover Monday’s Colts game as a Butler student reporter. While the Colts may have lost, Pearson definitely didn’t.

“Not everybody gets the chance to do this,” Pearson said. “I’m so grateful for this experience. It was such an honor for me to represent Butler at the Colts game in such a positive way.”