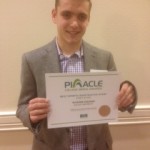 Couture was dismissed from the program a week after the original story was published last spring, and the same day that a follow-up story ran.

Ryan Lovelace ’14 received a second-place Pinnacle Award for best investigative story for his look at Allan Boesak, who was named the first director of the Desmond Tutu Center for Peace, Global Justice, and Reconciliation, a joint program of Butler and Christian Theological Seminary.