Message of the Stand Tall Project: We’re Here and We Care

Students and members of the Butler community have gathered across campus this fall to answer a question: What would you say to a survivor of sexual violence?

“I admire your strength,” one said.

“It’s not your fault,” added another. 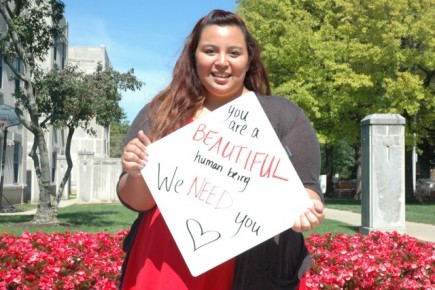 They wrote their messages on a whiteboard and got their picture taken in support of the Stand Tall Project, an initiative by Noelle Rich ’16, a Psychology and Sociology double major and second-year resident assistant in Ross Hall.

Rich said she started the initiative to tap into the energy surrounding the issue of sexual violence and assault on campus. Her three goals for the project are to raise awareness of sexual violence, support survivors, and eliminate blaming the victim. (Check out the Stand Tall Facebook page here.)

She presented the idea to Sarah Boeckmann, Ross Hall Residence Life Coordinator, after a residence life staff meeting early this semester. Boeckmann said she jumped on the chance to support Rich and promote an important issue on campus.

“I think sexual assault is an issue that is growing,” she said. “It’s also an issue that sometimes gets shoved under the rug. People don’t always like to talk about it, but it’s so important for survivors to know that there is support out there.”

The large amount of support from the Butler community encouraged Rich to take the project even further. Rich said she is working to form a Stand Tall Butler student organization dedicated to raising awareness of sexual assault and creating an environment of safety and support on campus.

Rich recognized that students who participated took their time thinking of a message. Some students took five minutes to jot down their message, while others took 20 minutes. Rich took an entire day before coming up with “You are a beautiful human being. We need you.” 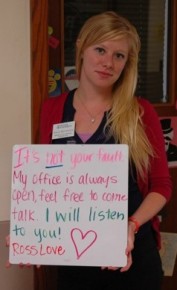 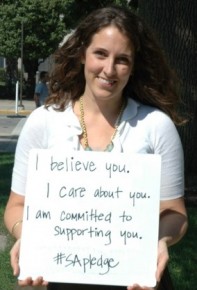 “I think sometimes people think their self-worth goes down after they have been assaulted,” she said. “I think it’s really important to remind people that they are valuable and we need them here.”

Sarah Barnes Diaz, Butler University Coordinator for Health Education and Outreach Programs, also spent the night thinking it over before putting her marker to the whiteboard.

No matter how long it took to craft the message, the message rang loud and clear: Butler University students are passionate about preventing sexual violence and supporting survivors.

Rich said she plans to expand upon the project next semester by asking students to write open letters to survivors of sexual violence. She plans to post the letters online to offer survivors an easy access point to support and personal messages from Butler peers.

“If a survivor needs emotional support or even just a message that reminds them of their strength,” she said, “it could be a place where they could go and easily find that.”