Butler University will confer honorary degrees on alumnus Jauvon Gilliam ’01 and Betty Kessler, who earned her teaching certificate from Butler in 1937, during the December 21 winter commencement at Clowes Memorial Hall. The ceremony begins at 2:00 p.m.

Nearly 175 students are expected to graduate. 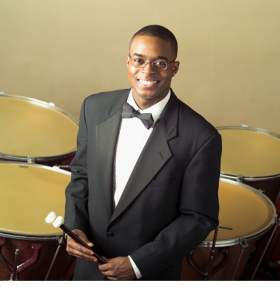 As an educator, Gilliam has led clinics at universities and institutions across Canada and the United States, including the Interlochen Arts Academy, New World Symphony, and the Percussive Arts Society International Convention. He currently serves as Director of Percussion Studies and Artist-in-Residence at the University of Maryland, Timpani Coach for the National Youth Orchestra of the USA, and Co-Founder of the annual Washburgh Timpani Seminar.

A native of Gary, Indiana, Gilliam began his musical career playing piano, winning his first national competition at age 11. He received a full scholarship in piano performance to attend Butler University, and later changed to full-time percussion study. He graduated with honors with a degree in Arts Administration and continued his graduate studies at the Cleveland Institute of Music.

“Jauvon Gilliam is renowned for his mastery of the timpani,” Butler University President James M. Danko said. “Both in his individual musical accomplishments and in his role within the orchestra, he exemplifies the Butler Way. He has achieved phenomenal personal success—and all the while, he has supported the creativity and talent of his colleagues by serving as the backbone of a team.”

Betty Kessler’s story exemplifies Ovid Butler’s vision for providing women with access to higher education. She arrived at Butler in 1935 with only one dress in her suitcase and a strong determination to become a teacher of young children. Kessler, now 97, worked in the Butler cafeteria to help pay her college expenses. Her favorite part of the job was serving lunch to Coach Tony Hinkle. 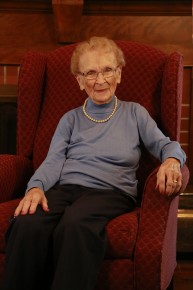 In sharing her memories of the Butler University community, she repeatedly used the word “kindness.” She said she was surrounded by people who cared deeply about her as a person and as a student.

She completed the two-year certificate program at Butler that was required at that time to become an elementary teacher in Indiana. She later earned an education degree through Indiana State University, but regrets that she did not receive a four-year degree from Butler.

Kessler’s teaching career spanned over 30 years in the small town of Morocco, Indiana, where she made a positive impact on thousands of lives. Her former students continue to visit her regularly, and Morocco named a park in her honor.

Her niece, Barb Greenburg, graduated from Butler and spent 43 years on the Butler faculty teaching Physical Education courses and coaching the women’s softball team. Greenburg’s two daughters, Mandy and Wendy, received their degrees from Butler’s College of Education and are teaching in the Indianapolis Public School system. This fall Wendy’s daughter, Casey, also enrolled in the College of Education to continue her great-great aunt’s legacy.

“Betty Kessler embodies the exceptional character and legacy to which the entire Butler community aspires.” Danko said. “She is remembered by her students with love and respect. Her professional excellence and dedication to the success of young people has been—and continues to be—an inspiration to us all.”