Butler Newsroom > Butler Home Page > In This Program, Young Writers Find Their Voice
Important Family Weekend Information In Lantzer’s Book, the Battle Between the ‘Wets’ and ‘Drys’ Goes On

In This Program, Young Writers Find Their Voice

As students trickle into room 238 at Shortridge Magnet High School, stagnant silence grows to a dull roar of laughter and chatter. Butler University students and Shortridge students catch up over peanut butter and jelly sandwiches, then get to the task at hand: creative writing.

Today, they will be crafting their own parodies. 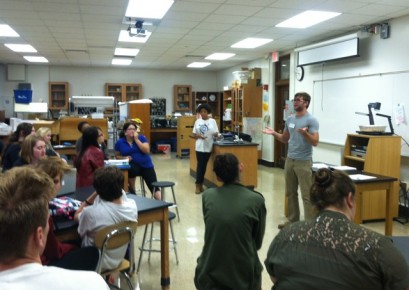 Butler MFA graduate student Luke Wortley leads the weekly poetry slam as part of the Writing in the Schools program.

One student writes and performs a parody of Miley Cyrus’s “Wrecking Ball,” reflecting upon the human contribution to global warming and the destruction of our planet. Another student exercises her imagination to rewrite One Direction’s “You and I” from the viewpoint of a love-struck fan.

It took less than 15 minutes for the cluttered science classroom to transform into a collaborative, energetic writer’s studio. The students spent the afternoon writing and laughing and writing some more. No idea is rejected ­– all are important and supported.

The writing prompts vary each week, and all students are encouraged to perform their work in front of the class at the end of the session.

The program was initiated in 2011 under the guidance of Susan Sutherlin, Butler English Department Director of Peer Tutoring, to provide students the opportunity to work in the community with liberal arts and encourage written creativity among local youth.

“We are all writers,” Sutherlin said. “We deeply believe in and are committed to creative writing and fostering that form of expression.”

Sutherlin taught and developed the program during its first two years before passing on the baton to Butler faculty member Chris Speckman, who served as her graduate assistant while still in Butler’s Masters of Fine Arts Creative Writing program.

Speckman, EN455-S professor and Writing in the Schools director, is entering his second year as the leader of the program. He hopes to build a community of writers where people from different walks and stages of life can connect through creativity and shared experiences. Room 238 is a nonjudgmental space where all students are encouraged to find their voice.

“This program is not the outsider coming in and bestowing all the knowledge on the lesser,” Speckman said. “We are doing this with them. We are a community of writers where we are all equals. Butler students and Shortridge students. We do it to discover things about ourselves.” 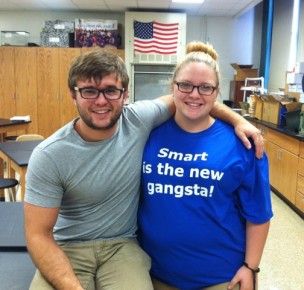 MFA graduate student Luke Wortley, in his second year as a graduate assistant, has found particular meaning in the Writing in the Schools program. He chose to attend Butler because of the one-of-a-kind opportunity to mentor high school students through creative writing.

“I’d never really worked in a setting like this where you work with kids that come from such different walks of life,” he said. “It’s instructive about the world. It’s helped give me some perspective, which is huge.”

Wortley said he never gets tired of watching the Shortridge students break down their barriers as they cultivate relationships with Butler students and learn to understand their written voice.

He experienced this transformation firsthand while working with Shortridge senior Paula Cloyd, a veteran of the program who has participated since its inception. He worked with Cloyd as she wrote a poem called “Speak” that eventually won the 2013 IUPUI Poetry Contest. (read her poem here)

“It was that first connection where we produced something really beautiful together,” Wortley said. “We instantly formed this relationship.”

With a newfound passion for public education, Wortley said he now hopes to become a high school teacher and remain involved in after-school programs for youth. He credits this decision to his experience with Writing in the Schools.

“It’s the single most meaningful thing I’ve ever done,” Wortley said. “It’s fulfilling in a way that I wouldn’t have gotten from anything else. It’s not only informing me as a writer, it’s informing me as a person.”