To Hone Their Skills, Recording Industry Study Students Get a Backstage Pass

Recording Industry Studies juniors Dan Fuson and Jesse May had two of the best seats in the house when Paul Barrere and Fred Tackett from the band Little Feat played Indianapolis in late October. In fact, they had something better than seats: They were on the side of the stage, making a recording of the concert that may end up as a live album. 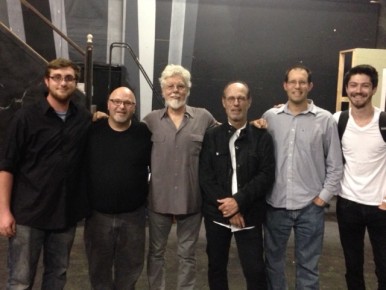 The two College of Communication students, working with Technical Services Coordinator Mark Harris and Communication Instructor Cutler Armstrong, spent about 10 hours in the theater that day, setting up equipment, recording the show, and packing up as part of their coursework in CME 220—Remote Recording Lab.

“It was a great experience,” May said. “That’s something you can’t get inside of any other class. In recording classes, we’re doing studio recordings and working with artists, but it’s still on campus. So to have an event where you’re going to work off campus in a real environment, that kind of experience is unmeasurable.”

“You can teach students all sorts of things in the classroom,” Harris agreed, “but here they got to go out and actually do something different than what they’d been doing. They also got to meet some legendary guys, hang out with them a little bit, work with them. It was really special.”

The opportunity to record the show came together after Harris conferred with his friend Mark Butterfield, an Indiana concert promoter who brought Barrere and Tackett to Indianapolis as part of his Indy Acoustic Café series.

Butterfield put Harris and Barrere in touch with each other, and they worked out a handshake agreement to allow the recording.

In the CME 220, students are required to make three remote recordings, mix the sound on one recording, and write an essay. Typically, the students record groups on campus, including the Butler Symphony Orchestra.

“The best part of this experience in my eyes was learning how to setup equipment in a completely foreign environment,” Fuson said. “I learned how much time it takes to get the necessary equipment not only for recording but for live sound set up at a professional level. Patience is necessary.”

Neither Fuson nor May knew much about Barrere and Tackett before the concert. They came away impressed. So did Armstrong, who described the musicians as “very nice guys, very unassuming.”

“It was super cool for those students because they got to work with and interact with these guys, and we had a bird’s eye view from the side of the stage,” Armstrong said. “We were able to be that close, and just to see that genius and that level of performance and dedication and professionalism was great.”

Now everyone involved is hoping the recording will be released sometime next year.

“And if and when it does,” Harris said, “Paul Barrere’s already told us that the students will have recording credits.”