Are You Ready for Some Paper Football?!

Deep in the basement of Jordan Hall, Room 048 is a plain, run-of-the-mill conference room, home to ordinary staff meetings and brainstorming sessions.

But come Fridays at lunchtime, the room becomes tense with calculated finger flicks as a paper football soars across the table dividing two athletic enemies.

This is the Butler University Paper Football League. 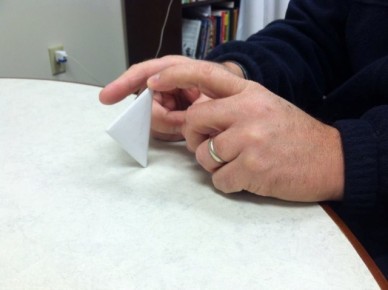 “I’m quite competitive,” said Elesia Yoon, Senior Instructional Designer in the Center for Academic Technology (CAT). “I try to channel inner relaxation, but I can’t help myself. I’m usually the one who starts the trash talking.”

“And I’m the kind of person that has to respond,” said Tim Thomas, Associate Director of CAT.

Their game is played with a small, triangularly folded paper, in which all edges are tucked in neatly to create an aerodynamic, dense kicking surface. Each player alternates flicking the paper football across the table to try to score a touchdown, which occurs when an edge of the paper football hangs slightly over the opponent’s end of the table.

Players receive an extra point for “kicking” the paper football through goalposts, made by the opponent’s outstretched index fingers and upright thumbs, after scoring a touchdown. The player with the most points at the end of the 10-minute game wins.

The traditional goal of a paper football game: to obliterate the opponent with precision and accuracy.

The Butler league goal of a paper football game: to relax (mostly) and have fun (usually) while meeting some cool new people (competition).

Thomas founded the league when he came to Butler less than two years ago as a way to form relationships among Butler staff and take a break from work. All Butler staff, faculty, and students are welcome to join the league for its 2014-2015 season.

“I think it’s a nice break from the day,” he said. “It takes you out of the work setting for a while, and it’s a great way to meet and connect with people other than in a meeting. In the course of these games, you get to learn about what people do.”

Butler’s finest paper football flickers from the Center for Academic Technology, Information Technology, Butler Libraries, and several other departments participated in the season last year, leading up to the finale football fans of all kinds are familiar with—the Super Bowl.

Players must participate in at least three games to qualify for the playoffs. The final two playoffs and Super Bowl are held in late January and include nothing short of what is expected from a typical NFL Super Bowl: dedicated fans, greasy food, nerve-racking nail biters, and, of course, entertainment.

Sally Neal, Associate Dean for Instruction and User Services, stole the halftime show with a Hugh Jackman sing-along to Oklahoma’s “The Surrey with the Fringe on Top.” All the while, fans showed their support with cheers, boom sticks, the wave, and a special appearance by Super Fan in a wild, colored wig.

“It was a great turnout,” Yoon said. “Just the fan base was huge. We were cheering for somebody, and then they’d lose, and you’d quickly cross their name out and write the next player’s name to keep on cheering.”

Chad Miller, Senior Director of Technology Development, won gold last year after entering the playoffs as the lowest-seeded player. But he left with more than just pride and the fresh glow of victory. Miller took home a tall and picturesque trophy, complete with a golden paper football on top.

“It was kind of glorious,” Thomas said.

“It was very glorious,” Yoon replied.