Prof. Bauman’s Book Explains the Violence Against Pentecostals in India

As part of his sabbatical in 2011, Associate Professor of Religion Chad Bauman decided to delve into Hindu-Christian violence in India and why Pentecostal evangelists were disproportionately targeted. He took two trips to India and talked to about 150 people—some who were victims of violence, others who are prominent critics of Christianity.

Initially, Bauman planned to write one book, with a small section on Pentecostalism. But his research yielded so much information that one book became two. 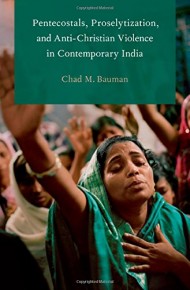 The first, Pentecostals, Proselytization, and Anti-Christian Violence in Contemporary India, is available now.

“A lot of the hostility to Christianity that’s found in India today is related to their evangelism and what’s seen as a predatory form of evangelism that targets vulnerable and marginalized people,” Bauman said. “It’s also seen as an evangelism that’s funded to a considerable degree from abroad, and that is true—about $1 billion a year goes from the United States to India to mission and service organizations.”

Evangelical and more conservative Christians feel they have an obligation to spread their faith, Bauman said. There’s not much room for growth in the United States, Europe, or even Latin America. So these days, many evangelists target the largely non-Christian countries of Asia and Africa.

India gets targeted because it’s massive—1 billion people—and because it has a large percentage of the world’s predominantly non-Christian population. In addition, India’s traditional and popular religion, Hinduism, has proven resistant to the incursion of other religions.

“I think many Christian groups take that as an affront or a challenge to their own faith,” Bauman said.

Another factor that makes India attractive to missionaries, Bauman said, are the Dalit, or lower-caste communities in India, who feel somewhat marginalized within the Hindu fold. Many missionaries think the Dalits are ripe for attracting to Christianity.

Bauman said Christians are seen by some of the more conservative elements of Indian society as a threat to tolerance and secular society “because they don’t respect other people’s faiths.” The result has been violence.

“Christians are seen to be intolerant,” he said, “and so the question is: To what extent can Indian society tolerate these aggressively evangelistic Christians before the secular fabric of the nation falls apart? 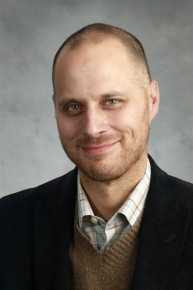 “Of course, in an irony that one sees sometimes in the American treatment of Muslims, some Hindus respond to that challenge by themselves acting in extremely intolerant ways towards India’s Christians, including, occasionally, with violence.”

Bauman said his second book on this subject will provide a history of Christianity in India through the lens of conflict, how the conflict developed, and how it came to be that Christians were seen as traitors and not fully Indian, even though there have been Christians in India since at least the 4th century.

Publication of that book is probably at least a year away.

In putting together Pentecostals, Proselytization, and Anti-Christian Violence in Contemporary India, Bauman found himself involved not only in India’s history but a little of Butler’s too. In looking for an image for the cover, he came across the work of National Geographic photographer Lynn Johnson. He contacted her about using her images and found out that she knew Butler’s campus well—she’s the daughter of former University President Jack Johnson. The cover of Bauman’s book is a picture she took.