Butler Newsroom > College of Communication > Journalism > Butler Collegian Wins Seven SPJ Awards
Undergraduate Research Gets Its Own Journal They Like Professor Levy’s Book. They *Really* Like His Book

The Butler Collegian was honored Saturday, March 28, with seven Society of Professional Journalists Mark of Excellence Awards, which honor the best in collegiate journalism.

Junior Audrey Meyer won for editorial cartooning (including “Ebola” and “Dirty Laundry”). Here is a link to Meyer’s cartoon collection. 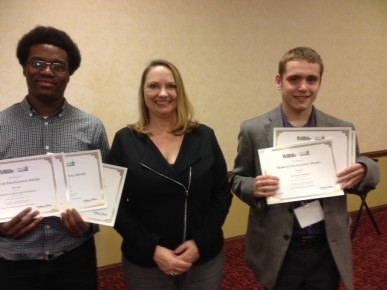 Former editor in chief Marais Jacon-Duffy ’14 and freshman Cassie Eberle won for general news reporting on the capture of a former Butler student by ISIS and video threat to behead him.

Award finalists were as follows:

Sophomore Matthew VanTryon, the Collegian’s managing editor, was a finalist for two awards: in-depth reporting, for his series of stories about allegations of verbal mistreatment and abuse by the former women’s basketball coach, and feature writing, for a story about former men’s basketball player Andrew Smith being diagnosed with cancer.

Sophomore Katie Goodrich, who was news editor last semester and is studying abroad this spring, also was a finalist in feature writing, for her story “Trip Tours the Nation.”

Seniors Ben Sieck and Mallory Duncan, who served as co-managing editors last fall and co-editors in chief near the end of last semester, were honored with a finalist award in the breaking news reporting. They wrote stories on-deadline for online and print about the death of former Butler student Abdul-Rahman (Peter) Kassig, who was beheaded by ISIS.

Editor-in-chief Julian Wyllie, a junior, was a finalist for general column writing.

The awards, for work published in 2014, were presented during the SPJ Region 5 conference in Louisville on Saturday. Regional winners advance to the national competition.