Deep in Kalchini, India, where cars are sparse and morning traffic consists of livestock, dogs, and locals on bikes, Ankur Gupta would make a weekly trip to an Internet café that had the only connection to the worldwide web in a three-hour-plus radius. 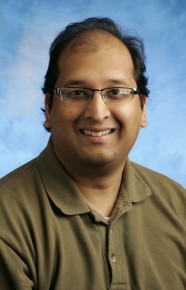 Upon arriving, he sat down on a bench and opened up his laptop computer. Some local children began to trickle over, crowding behind him to get a clear view of the screen.

Although on sabbatical for the semester, Gupta, Associate Professor of Computer Science and Software Engineering, couldn’t pass up the opportunity to share some computer programming knowledge with the curious, wide-eyed children.

“There were 12 to 15 kids looking over my shoulder, just trying to figure out what the heck I was doing,” he said.

Through what he called plain coincidence, Gupta—who had gone to India to see his family—ended up spending an afternoon each week of his almost two-month visit teaching computer programming to local children.

Gupta spoke in Hindi, the children primarily spoke in Bengali, and all computer language was in English.

The triple language barrier was tough, but not impossible.

Hindi is an ancient language, and computer terminology doesn’t always translate, but Gupta found ways to explain the concepts so the children could understand.

“You just kind of wing it,” he said. “We were speaking to each other in languages that we didn’t understand, but when you are trying to learn something, you make it work.”

As the children memorized his computer code and latched onto the logic behind programming, Gupta said he noticed a shared revelation among his students—the world is boundless and up for grabs.

Before that, they were confined to a small town in West Bengal that Gupta described as a short, one-lane road lined with shops crammed in rows. Now, children who spend their days working on farms or shops connected to the area’s booming tea industry saw opportunities in fields they didn’t know even existed.

It was this that Gupta called his greatest contribution to the children of Kalchini. A teacher through and through, he said he prized the opportunity to open and inspire young minds.

“I just did this because I thought it was a chance to share things that I thought were cool about life with people who hadn’t seen them before,” Gupta said. “Ultimately, that’s the motivation for every teacher on campus.”