Matthew Kraemer ’99 has been named Music Director and Principal Conductor of the Indianapolis Chamber Orchestra (ICO).

“The Indianapolis Chamber Orchestra is a dynamic organization comprised of superb musicians providing its audience an impressive variety of music and concert formats,” he said. “This position would undoubtedly be highly attractive to any conductor, but I am also drawn to the ICO because of my sincere affection for the rich and varied repertoire available to chamber orchestra.” 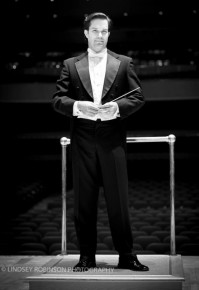 Appointed Music Director of the Butler County (Pennsylvania) Symphony and the Erie (Pennsylvania) Chamber Orchestra in 2012, Kraemer has reinvigorated both ensembles with innovative programming and elevated artistic standards. His active guest conducting schedule has included appearances with many of the nation’s finest orchestras, including the Atlanta, Baltimore, Houston, Indianapolis, Saint Louis, and Virginia symphony orchestras, as well as Canada’s Mississauga Symphony and Hamilton Philharmonic and in Europe with the Vidin Philharmonic and the Orquesta de Cadaqués.

The Indiana native is noted for his “musical sensitivity” and “energized sense of interpretation.”

“I’m thrilled about our new Music Director,” Indianapolis Chamber Orchestra Vice President of Audience Development and owner of Meridian Music Craig Gigax said. “He represents a new beginning to the ICO and Indianapolis, and will bring energy, ideas, relationships with soloists, and an innovative vision.”

The Indianapolis Chamber Orchestra’s mission is to advance and promote music composed for the small orchestra through professional concert performances and education programs. The ICO also provides accompaniment to many area arts and educational organizations.
Broadcasts of its concerts can be heard on WFYI-FM (90.1) on Monday evenings.