The reviews are in: Professor Andy Levy’s new book, Huck Finn’s America: Mark Twain and the Era That Shaped His Masterpiece, is an enormous success. 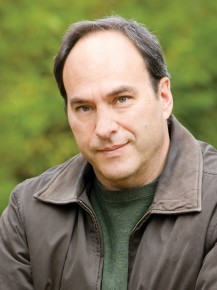 The New York Times: “Capacious, companionable…Levy is excellent on Twain, on his drawl, his gait, his evolution on race matters…and even better on his contradictions.”

Boston Globe: “Levy’s subtle take on Mark Twain and his great book is a welcome addition to our understanding of both.”

Levy said the attention the book has garnered has been “solidly exciting, solidly nerve-racking.”

“I’ve had books covered by national media before,” he said, referring to The First Emancipator: Slavery, Religion, and the Quiet Revolution of Robert Carter (2005), and A Brain Wider Than the Sky (2009). “But you never really know what’s going to happen. And likewise, there’s enough time between books where you think no one’s paying attention to you anymore.”

In addition to reviews in newspapers throughout the country, as well as magazines like the New Yorker and web media sites like the Daily Beast, Levy’s work has received recognition in several other ways. He has done close to twenty radio interviews, ranging from NPR affiliates nationwide to conservative talk radio to Bill Bradley’s American Stories program on Sirius/XM. 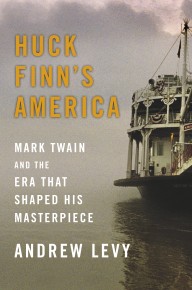 He’s been invited to do Book TV on C-SPAN in April with NPR’s book critic, Maureen Corrigan, who has a new book on The Great Gatsby. And Levy has been invited to speak at Twain’s 180th birthday celebration at the Center for Mark Twain Studies in Elmira, New York. While there, he’ll get to stay in the house where Twain wrote The Adventures of Huckleberry Finn.

Also, Levy has been invited to write essays about Huckleberry Finn as contributor to several new volumes about Mark Twain and American literature. And he’s been told that his book, which entered its second printing in February, is already being taught in high schools.

He attributes the success, at least in part, to the painstaking research he did, which took over twenty years and resulted in more than 120 pages of endnotes in the book that document his findings.

“If you do your work, people pay attention,” Levy said. “They send you kind emails and they try to get you involved in their worlds, and that makes the work that much more worthwhile..”

But among the most gratifying results is the number of people who have recognized the student-centered component to his work. Butler students helped him research Twain and Huck Finn, and their participation has been noted in some emails Levy has received, as well as some reviews and social media postings.

“I’m really proud of that, and I felt like that emerged from a real positive about Butler,” he said. “My ability to trust my students and their ability to trust me made a difference. I want to keep doing that somehow. The idea of working with students in the future on projects that become books on which they get both the experience and the credit that they deserve really strikes me as an appealing way forward.”