Three Fingers Up — Way Up — for This Real Business Experience Team

Whenever a player in the men’s basketball Final Four hits a three-point shot this year, look for kids in the student section to be excitedly waving a gray foam hand with three fingers extended upward. 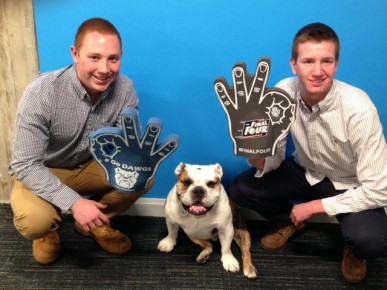 Brian Todd, left, and Brian Straughn show off the Thringer — with a little help from Trip.

The NCAA was so taken with the Thringer that it bought 3,000 of them—750 for each student section—to give to the student sections during Final Four weekend April 4-6.

Todd said the idea for the Thringer hit him in his dorm room last fall while watching TV, when he noticed the number of foam fingers being used by fans at sporting events. He proposed the idea to his team in the RBE class.

The yearlong RBE class begins each fall with students coming up with an idea for a product or service and creating a business plan. They get up to $400 to do a “proof of concept”—test marketing—where they learn about pricing, target marketing, and packaging. The Thringer team, which calls its company Freelance Foam, tried out the Thringer at a Butler basketball game and saw that students liked the idea.

The final step in the first semester is making a presentation to an independent funding panel that can award up to $5,000 in startup funds.

It was there that Freelance Foam first made contact with the NCAA. One of the panel judges saw the students’ business plan and knew someone at the NCAA who oversaw some of the March Madness events. The NCAA representative came to the funding panel to hear their presentation.

“We asked her for her business card and we kept in touch with her,” Todd said. “She directed us to someone who’s in charge of their internal promotions.”

Then they went out and executed, including finding a manufacturer in Elkhart, Indiana, to produce their product.

“I didn’t know if this would work or not,” said Jim McKneight, Instructor in Management and Prelaw Advisor in the Butler University College of Business, who advises RBE students about legal, contractual, and tax issues while they run their business. “But what we challenge kids to do in RBE is to take a swing. Go try it. As long as you’re ready and you’re professionally prepared, usually good things will happen. And these guys were terrific.”

The Freelance Foam students said they don’t know whether they’ll continue to run the business after their class is over. Todd said they “never really did it for the money. It was just taking the idea and running with it. And there’s not a much bigger stage you can do than the Final Four, the biggest stage in college basketball.”

“After putting in hours of work for months to finalize this deal, we couldn’t be more proud of ourselves for this accomplishment,” Straughn said. “It proves that hard work truly does pay off.”