Matt Speer ’15 and Andres Peña ’15 have had quite the senior year.

The College of Business students released a trial version of their mobile charitable giving app, rippl, on the App store in early February.

Since then, rippl has accumulated over 200 users, raising $13,000 total for nine participating nonprofit organizations in just two months.

And on Tuesday, April 7, Speer and Peña’s app placed third out of five semi-finalists in the Recess 2015 Pitch Competition campus tour at Indiana University. 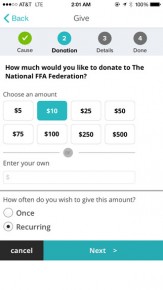 Recess is a touring college music and ideas festival that seeks to cultivate and inspire the next generation of young entrepreneurs. The collegiate pitch competition offers motivated students who have started a business the chance to pitch their idea in front of a panel of seasoned entrepreneurs and investors.

One team finalist is selected from each campus tour to attend the Recess Field Trip in Los Angeles on May 28, where team members will get the once-in-a-lifetime opportunity to meet major investors and advisors to pitch their idea.

If rippl had continued on as a final contender for the Recess Field Trip, Speer said he thinks the app might have received some major financial backing from investors.

But all is well that ends well, and Speer and Peña said they left Indiana University with the feedback and motivation to continue improving and expanding their app.

“Yeah, we got third. But the experience and feedback was great,” Peña said.

“Getting so close to the finals really motivates you,” Speer added. “It makes you realize how far you’ve come and how close you are to making it happen and reaping the benefits.”

The two-month app trial is almost at its close, and Speer said the duo will begin analyzing result data soon to determine the best direction for the app moving forward.

Right now, they are most interested in adopting a business model that focuses on building an audience first and monetizing the app later.

They hope to garner enough funding to develop a final version of the app that will allow nonprofit organizations to register and manage their own rippl account completely free of charge.

“No one really offers free things to nonprofits,” Peña said. “If we start offering them free mobile access to potential donors, I think it could really catch on.”

Speer and Peña said they will continue to work on their app while they start their careers.

Speer will begin as an Orr Fellow with Bluebridge in Fishers, Indiana, on June 1. Peña begins a marketing position at Defender Direct in July.