Three Butler students have won the prestigious Fulbright English Teaching Assistantship award to teach in another country during the 2015-2016 school year.

“The recent success of Butler students with international fellowships such as the Fulbright shows the global awareness and influence of our graduates,” said Rusty Jones, Director of Undergraduate Research and Prestigious Scholarships. “All of these students will be fantastic representatives of not only the Butler community, but the United States as a whole, as they spend a year abroad working in these foreign environments. I have no doubt that they will all leave an indelible impression on everyone with whom they interact.”

More about each student follows. 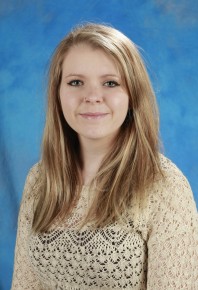 Vocal performance/German double major Julie O’Mara ’15 will be going home, sort of, when she leaves for her 10-month Fulbright English Teaching Assistantship in Germany in September.

When she was 9, O’Mara’s father was transferred to Germany, and the family spent five years there.

“I’m so excited to get to go back,” she said. “I still can’t fathom that I’m going, and since I’ve already lived in Germany, I have some sort of vision of what it’s going to be like.”

O’Mara doesn’t know where or what grade level she’ll be teaching—she’ll find out closer to her departure—but it could be doing anything from teaching immigrant students to helping assistant-teach advanced English students at a university. She’ll be in Germany through June 2016.

On the surface, the Fulbright is not at all related to her music major. But O’Mara said that in the essays she submitted with her application, she discussed her interest in musical theater and her hope to incorporate it in her teaching in Germany.

“If I could get involved or help start a school program where we could do music—that was definitely part of my application,” she said. “So maybe that’s what they were interested in as a way of teaching English.”

O’Mara came to Butler from Flemington, New Jersey. Her brother went to Knox College in Illinois, and she wanted to go to school in the Midwest as well. Butler initially wasn’t on her radar, but then she heard about the University when the men’s basketball team went to its first Final Four in 2010.

Her father looked up Butler online to check on the quality of the School of Music, and they decided to stop by between visits to schools in Wisconsin and Ohio.

After graduation, she plans to continue performing. In Germany, “I want to continue my German practice and continue learning the language,” she said. “I want to be fluent. That’s my goal.”

With a French father and an American mother, Léa Levy ’15 grew up immersed in a bilingual home with an appreciation for foreign language and culture.

Now an Anthropology and Spanish double major with a minor in German, Levy said her love for the process of learning new languages has only grown during her time at Butler—so much so that she has accepted a 10-month Fulbright English Teaching Assistantship in Colombia beginning in late July.

“I’ve had such good experiences learning languages, and it’s something I’m so passionate about,” she said. “I think getting to teach that to other people will be such a great opportunity.”

While Levy does not know many details about her placement yet, she does know a little about her future students. Like her, they will be university students with a shared passion for language and learning how to teach English to others.

Levy has had experience teaching English to elementary and middle school students through various school and study abroad opportunities, but this is the first time she will teach students who already have a firm grasp on the language.

She said she welcomes the new challenge of discovering how to help students with English fluency and teaching strategies. Essentially, she will be teaching students how to teach English while conducting class in Spanish, bringing her passion for learning, speaking, and teaching language full circle.

Levy also will share another passion of hers with those she encounters in Colombia—organic farming practices.

Fulbright winners are expected to act as United States ambassadors in their host country through a mutual sharing of culture and ideas. Levy hopes to accomplish this by sharing organic farming techniques she has used at home.

Whether teaching English or organic farming, Levy said it is the overall cultural exchange with Colombians that she is most excited about.

“Just getting to go to South America to discover this new place and new culture will be really great,” Levy said. “I think I’ll really be able to integrate into the culture of the community and get to know the people.” 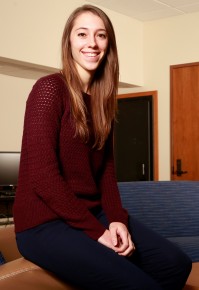 Amber Zimay ’15 grew up in the Chicago suburbs and came to Butler knowing she wanted to study education. From Day One, she said, the College of Education—and Butler—prepared her step by step to teach.

Their efforts paid off in a big way: Zimay has won a Fulbright English Teaching Assistantship to work in Mexico. She starts with orientation in late August in Mexico City and then will move to an as-yet-to-be-determined location somewhere in the country, where she will teach English to high school students.

“I studied abroad in Spain and absolutely loved it,” she said. “I love traveling, so I wanted to keep doing that.”

Zimay majored in Secondary Education/Spanish and English As a New Language (ENL), and when she graduates in May she’ll be certified to teach in either subject area.

“Going to a Spanish-speaking country helps me,” she said. “I’ll obviously be speaking Spanish and improving my skills in that area, but I’ll also be teaching English to non-native speakers. So it combines three of my passions, and I really wanted to explore all of them. So this was a perfect opportunity to do so.”

This spring, she spent her semester student-teaching at Pike High School and Belzer Middle School in Indianapolis.

After finishing the Fulbright, Zimay plans to teach high school. She said she’s grateful for her Butler experience.

“The College of Ed has really become a home,” she said. “All the professors are more than just professors – they’re mentors and friends and people I go to for advice. I know even after I graduate from Butler, I’ll still be in contact with them.”