Students Take Responsibility for Keeping Each Other Safe

Hannah Hendricks’ experience with sexual assault hits especially close to home for Butler students—she was raped during her first year on campus.

“Students know that sexual assault exists,” said Noelle Rich, founder of Stand Tall, a student organization dedicated to awareness and prevention of sexual assault. “But not everyone knows it exists on our campus. Having Hannah hear to talk about it as someone who’s been a Butler student, gone to the campus Starbucks, studied on the Mall—it brought the issue back here. It could happen to any of us.” 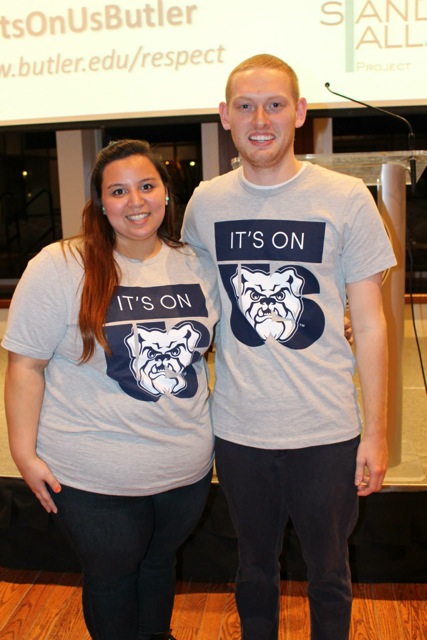 Noelle Rich and Austin Del Priore emceed and helped organize the “It’s On Us” Butler kickoff.

Hendricks came to speak as a part of the “It’s On Us” Butler Kickoff event on Monday, March 30, in which students signed a pledge to end campus sexual assault.

The pledge is a part of President Barack Obama’s national “It’s On Us” campaign, and it encourages “a personal commitment to help keep women and men safe from sexual assault. It is a promise not to be a bystander to the problem, but to be a part of the solution.” (Take the pledge here.)

The event was part of a larger initiative to eradicate sexual assault on campus. (Check out the SGA “It’s On Us” video here.)

Over 500 students gathered in the Atherton Union Reilly Room to sign the pledge and learn more about the nature of sexual assault, how to prevent it, and where to find help or information.

Austin Del Priore, SGA President of Administration, emceed the event with Stand Tall founder Rich, and he said he was thrilled by the heavy turnout.

“I was immensely proud of the campus community for uniting around such an important cause,” Del Priore said. “Butler students are involved in so many different clubs and organizations, but we all share the fact that we belong to the greater Butler community. I believe we all have an obligation to make that community a safe place for everyone.”

Campus representatives from Counseling and Consultation Services, the Victim Advocate, and University police participated in the event to demonstrate the support available to students on campus and the university’s dedication to creating a safe and healthy campus environment.

But sexual assault exists everywhere, not just on a college campus.

Representatives from several community agencies, including the Julian Center, Legacy House, Domestic Violence Network, and Center of Hope, joined the event to speak about the availability of community resources to students and survivors of assault. Each organization addressed the group of attendees, and students were able to connect one-on-one with agency leaders at the conclusion of the program.

Sarah Diaz, Coordinator for Health Education and Outreach Programs, said she hopes the involvement of community agencies encourages students to reach out for information and discover new ways to make an impact in Indianapolis and beyond.

At the end of the event, students left armed with the resources, community connections, and an “It’s On Us” T-shirt to act as crusaders in the effort to end campus sexual assault.

Rich said she is excited to see the rapid growth of sexual assault awareness on campus. From the start of her Stand Tall photo project last semester to becoming a recognized and valuable student organization this semester, Rich said she hopes the momentum keeps up.

“To see it all come together has been really cool for me,” Rich said. “We are putting on the same T-shirt, promoting the same cause. We are all Butler students coming together to be on the side of change on our campus.”