Indiana Landmarks, a private nonprofit organization that saves historic places, has selected Butler University as the winner of its annual Cook Cup for Outstanding Restoration for its preservation of Hinkle Fieldhouse. The dome of Indiana Landmarks Center’s Grand Hall will turn Butler blue when Director of Athletics Barry Collier, Executive Director of Facilities Rich Michal, and Butler Blue III accept the silver cup at an event on April 25 in Indianapolis.

Although Hinkle appeared sturdy and timeless, it was a National Historic Landmark in need of attention before Butler launched a $36.2 million restoration that concluded last year. 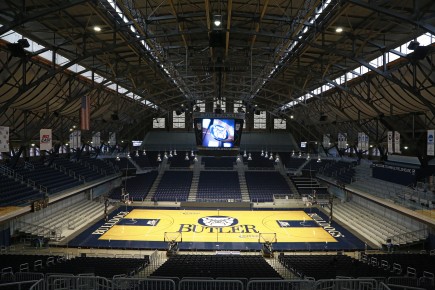 The university’s enrollment barely topped 1,000 when Fermor Spencer Cannon designed Butler Fieldhouse in 1928 to seat 15,000. The fieldhouse has hosted graduations, addresses by six U.S. presidents, a concert with 125 pianos, indoor track meets in the ‘30s where Jesse Owens set a world record, and a World War II barracks.

To many Hoosiers, Hinkle will forever be remembered as the home of Indiana’s single-class high school basketball championship. Angelo Pizzo, who wrote the screenplay for the movie Hoosiers, called the fieldhouse “a work of art and a thing of beauty.”

“Keeping Hinkle, Hinkle” meant tuckpointing all the masonry, restoring the steel-sash windows and replicating those that were too rusted to save. “The windows contribute to Hinkle’s signature ambiance, a place flooded with natural light that lends the exposed steel girders a sculptural quality,” says Indiana Landmarks President Marsh Davis, a Butler alum.

Filled over the years with mismatched glass, the windows were retrofit with 9,700 new energy-efficient panes. Because Butler won a federal preservation grant for the window rehab, the entire project followed federal restoration guidelines.

Inside, to “make Hinkle more Hinkle,” the restoration removed cement-block offices, storage closets and concession stands under the bleachers and on the concourse. This change returned the original configuration, opening up the concourses and uncovering the trusses that rise up and over the barrel-vaulted ceiling.

To improve conditions for student athletes and attract recruits, Butler renovated the West Gym and dingy locker rooms, training and workout areas, and the academic center. They created new spaces for these functions and athletic offices in a dark, unused natatorium north of the West Gym, adding two floors in the space, opening up bricked-in windows, and installing an elevator that makes the upper levels of the fieldhouse handicapped accessible for the first time.

“The restoration means that the Bulldogs can continue to attract student athletes and, in 2115, Hinkle Fieldhouse will still be standing strong,” declares Carl Cook, Indiana Landmarks board chairman and head of the Cook Cup selection committee. He will present the Cook Cup at Rescue Party, an annual benefit for Indiana Landmarks’ Endangered Places programs. Tickets for the April 25 event are $75 per person and must be purchased in advance at rescueparty2015.eventbrite.com or by calling 317-639-4534.