The result was a backlash that spread across the country.

Butler President James M. Danko was the first university president to speak out against the law. (See President Danko discussing the “Religious Freedom” act on MSNBC here and here.)

This is the statement he issued on Sunday, March 29: 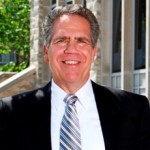