Bryan Brenner ’95 Elected to Board of Trustees

Bryan Brenner ’95, founder and CEO of the Indianapolis-based strategic business advisory FirstPerson, has been elected to a three-year term on the Butler University Board of Trustees. 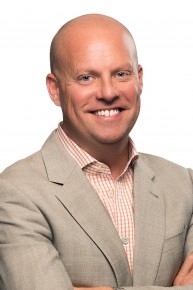 He is a member of the College of Business (COB) Board of Visitors and has served on the Young Alumni Board. His company has provided support to COB’s MBA Board Fellows Program and Butler Athletics.

Brenner founded FirstPerson, a privately held company, in 2010, merging two Indianapolis firms—his own Benefit Associates and Benefit Consultants, owned by Russ Stuart. FirstPerson now ranks as one of central Indiana’s largest employee benefits service firms and was honored as a 2010 Indiana Company to Watch by the Indiana Economic Development Corporation.

Brenner serves on numerous boards, including The Oaks Academy, Indianapolis Symphony Orchestra, and Aspire Indiana, Inc. Additionally, he serves on the National Advisory Board of Directors for NFP Benefits.

His wife, Elaine (Miller) Brenner ’94, earned a bachelor of music in music education from Butler’s Jordan College of the Arts. She has worked as a children’s photographer and previously served as a music teacher in Batesville Community Schools; an admission counselor at Butler; and Director of Small Groups at Eagle Alliance Church.

In addition to Brenner’s election, the Board re-elected eight trustees to three-year terms at its May meeting:

The officers of the board also were re-elected. They are: