Butler Chorale Members Are Back For An Encore

He left Butler nearly 20 years ago, but, from 1986–1996, Michael Shasberger provided his students in the Butler Chorale with great memories—including five international tours and the staging of Handel’s “Messiah”—along with instruction that still guides them today.

The memories are so strong, in fact, that over the July 24–26 weekend, about two dozen of Shasberger’s former students came from all over the country to reunite and sing with him again in Indianapolis. 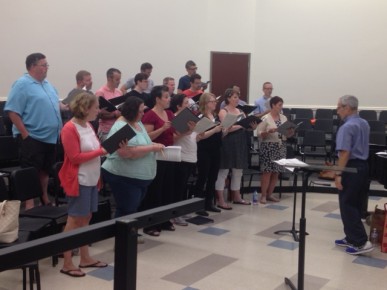 Former members of the Butler Chorale returned to Butler to sing with their former conductor, Michael Shasberger.

“He’s probably one of the finest choral conductors I’ve ever worked with, and I’ve worked with a lot of conductors,” said Sam Hepler ’94, a professional singer and musician based in New York City. “He’s a wonderful man and was a wonderful teacher—and I’m sure he still is—and he brought the best out of all of us.”

Shasberger and his former students rehearsed on Friday and Saturday for a Sunday performance at North United Methodist Church. The song selection included some numbers they performed in the student chorale, as well as a few more current pieces.

Mary Scheib ’96 organized this reunion, the second time Shasberger’s Butler students have gotten back together. (The first was in 2009.) These days, Scheib, who lives in Nashville, Tennessee, sings as a freelancer and has a day job in professional development at Vanderbilt University Medical Center.

Although some of the reunion participants had never met each other because their years in school didn’t overlap, they were “bound by the shared experience of Michael Shasberger,” Scheib said.

“Dr. Shasberger has such a style with singers to not only make them comfortable singing in their own way—in their own voice, rather than in a choral voice—but to inspire them to sing better,” she said. “That created such an environment of growth while you’re here for four years that everybody wanted to come back and experience that again. Not to mention all the friendships that are forged and funny stories that happen along the way.”

Shasberger, who now teaches and conducts at Westmont College in Santa Barbara, California, estimated that about half the participants in this reunion are active as professional singers. Some still sing on the side, and some have found completely different careers.

What they have in common is “a wonderful sense of community. An incredible spirit ran through the group. It’s really affirming, and a real delight. And it’s so great to see them. They look fabulous, and they have so much energy, and, as I told them last night, ‘You’re all as old as I was when I was here.’”

As for Butler, it’s a far different place than they left.

“Butler looks fabulous,” Shasberger said. “The facilities are what we always talked and dreamed about and planned for. But what I’ve learned over the course of a 40-year career is that the work that really matters is the work that you leave that continues to prosper. And to see that here is really exciting.”