The Biggest BITS Ever: 1,200 Bulldogs Hit the Streets

On August 31, 2015
By Evelyn Schultz ’16
Senior Emma Kortebein spent Saturday morning whitewashing an Indianapolis woman’s fence at her house along 38th Street as part of Bulldogs Into the Streets, Butler’s annual day of serving the community. 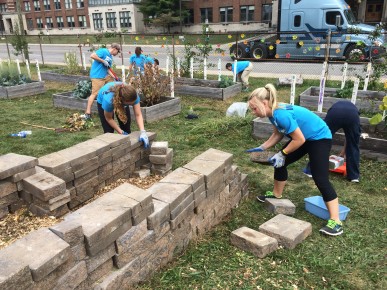 Seniors Sam Marulli and Claire Thoma laid the bricks for a compost pile at the Butler lab school.

Kortebein and a group of her peers also helped fix a chandelier inside the woman’s home. When they were done, the group came back to Butler to eat lunch and chat about their experience.

“It was so rewarding,” Kortebein said. “We did it with alumni, with people of all ages. I think it was better this way, and I think we should do it more often. It’s a great way to bond with the community.”
In past years, only new students participated in BITS. This year, the program was expanded to include volunteers of all ages—with incredible results. Over 1,200 new and returning students, faculty, staff, alumni, and members of the Butler family headed out to about 25 service sites in the city. Their combined 2,400 hours of service are estimated to be worth over $50,000.
Though volunteers spread out all over Indianapolis, some service projects took place just blocks from campus.
At Shortridge High School, volunteers worked organizing sheet music, decorating class space and refurbishing one of the front doors. And across the street at the Butler Lab School, Courtney Rousseau ’03 spent the morning volunteering in the garden with her daughter. Rousseau now works in Internship and Career Services, and her daughter attends the Lab School.
Volunteering alongside other members of the Butler community was a no-brainer, she said.
“It’s good to see all of the students and everyone come together,” she said.
Freshman Cole Seager had a similar experience. He was inspired to sign up for BITS by older students he met during orientation last week. As he spent the morning laying mulch outside the Lab School, he reflected on the impact the volunteers were able to make in such a short amount of time.
“I like the difference it makes in people’s live,” he said. “It only takes us two others to do what it might take these places three weeks. It makes my day.”
Please share it!