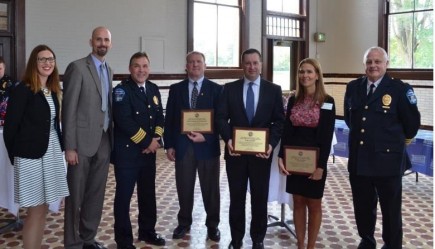 Speaking at the 32nd annual National Night Out Kick-Off and Crime Fighter of the Year Award Ceremony, hosted by the Indianapolis Metropolitan Police Department, Curry said Butler was chosen for the school’s work in improving the success of youth and families by addressing truancy, bullying, and through other crime prevention initiatives.

In 2013, Butler University partnered with the Marion County Prosecutor’s Office to present the “End Bullying Now” forum. The event provided an opportunity for experts to educate parents, caregivers and educators on the educational, legal and psychological effects of bullying. Curry said his staff has utilized this information in the office’s outreach efforts with young people across the county, sharing solutions for prevention and intervention in bullying through the office’s CyberSafe program for students and their parents.

Butler and Oliver have also been instrumental in efforts to address truancy in Marion County. Recognizing that truancy often is a result of other family issues, the Marion County Prosecutor’s Office set the goal of finding productive consequences for children who do attend school regularly and their parents. Oliver and Butler graduate students created and implemented a four-part parenting class that was court ordered as a condition of a diversion agreement for parents. Butler students also created and implemented a program for middle school students who were truant from school.

Butler University Police Department was recognized for implementing a successful anti-alcohol diversion program for university students, spearheaded by Detective Bruce Allee. Minor alcohol offenses by students on campus can be addressed through a pre-diversion program which requires students to participate in an impact panel and community service.

“We’re proud of the work that Dr. Oliver and Detective Allee have done,” Hunter said. “Indianapolis is our home, and Butler’s home, and we want to do whatever we can to make this a world-class city.”