A Message to Chrissie Hynde: Rape is Never the Survivor’s Fault

Sarah Diaz, the coordinator of Butler’s Victim Advocate Program, cringed when she read what musician Chrissie Hynde said about having been raped—that being assaulted was her own fault.

“If you don’t want to entice a rapist,” Hynde, the leader of the group the Pretenders, was quoted as saying, “don’t wear high heels so you can’t run from him. If I’m walking around in my underwear and I’m drunk? Who else’s fault can it be?” 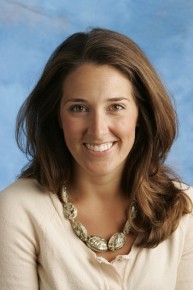 Diaz’s response: “I would hate for any survivor to internalize that as their truth, for them to believe that because the circumstances were similar in their situation that they should also believe that it’s their fault. When people have that public voice, there’s a real responsibility to think about the consequences of the words they choose to use.”

Diaz, now in her ninth year at Butler, deals with campus sexual assaults and educates students about consent, bystander intervention, and the importance of supporting survivors of sexual trauma. She said victims should never be blamed, no matter what the circumstances.

“There’s a place for risk reduction,” she said. “It’s important for us to be aware of our surroundings to the best of our abilities, but when there is a sexual assault, it’s because someone has decided to take advantage of another person.”

-A full-time victim advocate – Diaz – who’s available 24 hours a day. She helps sexual assault survivors find community resources, takes them to hospital, and counsels them about their options.

-A student organization formed last year called The Stand Tall Project, which sends the message to survivors that “we believe you, we support you, you’ll get through this.”

In addition to her work at Butler, Diaz also is active citywide in programs that work toward building safer communities.

On August 28, she was recognized by the Legacy House as a Community Champion. Legacy House, which provides free counseling, therapy and prevention work in the community for survivors of any kind of violence and their family members.

“I have worked really hard to be collaborative and to get some conversations started,” she said. “Now we’re able to have better conversations about rape and sexual assault and not just share some statistics. Really, really, we are working to engage students to understand the role they can play in preventing sexual assault from happening.”