The Indiana Pharmacists Alliance has awarded Butler PharmD candidate Daniel Peterson ’16 its Outstanding Student of the Year Award. The award recognizes students who have been actively involved in association activities and have helped to promote the advancement of pharmacy. 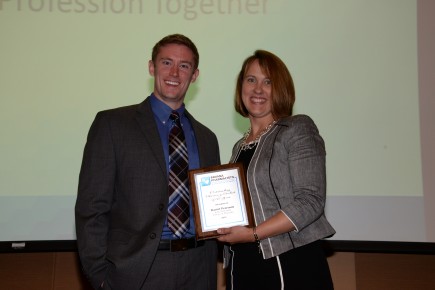 Peterson is scheduled to graduate with a Doctor of Pharmacy degree and an MBA. Daniel is an intern at CVS pharmacy.

Peterson has also held many leadership positions. He is the President of his pharmacy class at Butler University. He is the Director of Resources and Records for the Butler University Community Outreach Pharmacy (BUCOP). Last summer, he was chosen out of many applicants as the VALOR pharmacy intern at the Richard L. Roudebush VA Medical Center.

He was also awarded a McSoley scholarship by the Indiana Pharmacists Alliance in spring 2015.

Peterson is an avid volunteer. He has participated in the Phi Delta Chi cleanup of inter-city neighborhoods and has worked at BUCOP, a student-run clinic that provides free medical care to an underserved community.

The Outstanding Student of the Year award was presented to Daniel during the Indiana Pharmacists Alliance’s Annual Convention at the French Lick Convention Center on September 17.