On Theatre Day, All of Butler’s a Stage

Michael McClellan, a senior at Roncalli High School in Indianapolis, wants to be a filmmaker. But when he heard about Butler’s first-ever Theatre Day on September 19, he couldn’t resist signing up. 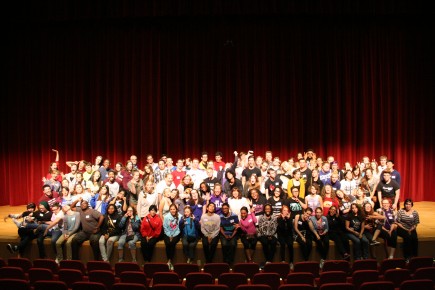 Along with over 100 other high school students from Ohio, Illinois, Kentucky and Indiana, McClellan was able to experience a day in the life of a Butler theatre student.

He says the one-on-one instruction with professors and college students inspired him to be himself both onstage and off.

“They were talking about, ‘We don’t want to see your characters, cause anyone can do a character. We want to see who you are and what you can bring to this college,’” he said.

Theatre Day was the brainchild of LaKisha Cooper, an administrative assistant in Butler’s Theatre Department. She dreamed up the idea as a way to expose high school students to the program while allowing Butler’s theatre majors to shine.

“Our students don’t realize the great work they do, and I wanted others to see that,” she said. “This is a great place to go to school.”

Theatre major Kristen Gibbs ’18 agrees. She says the day was the perfect opportunity for high school students to experience actual theatre classes with college professors – an opportunity she wishes she could have had.

“During my audition, they didn’t have enough time to tell us everything that was in the curriculum,” she said. “I feel like coming here on this day and getting a little taste of everything, even if it was just a snapshot, I feel like that would have benefitted me a lot.”

In a makeup class, students were able to paint each other’s faces like zombies. In an acting class, professor Elaina Artemiev led students through an exercise, and voice, movement and lighting classes completed the lineup. 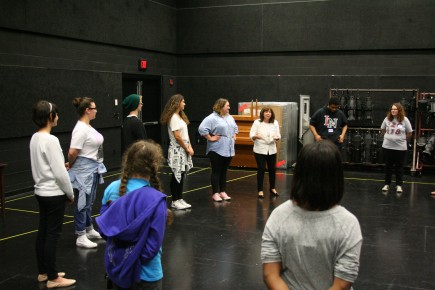 At the end of the day, a few lucky ninth- through 12th-graders were picked out of the crowd to perform their monologues for three professors in a mock “audition” in the Schrott Center.

After each performance, students applauded their peers with supportive whoops and cheers. The professors provided instructive criticism and tips for the students to improve their monologues, providing the perfect finale to an educational day.

“This is a great process to let them see an audition,” Adam Bridges ’18 said. “It’s really cool because it’s terrifying the first time you do an audition process.”

And although the day was jam packed with educational sessions, according to Gibbs and Bridges, the high schoolers’ favorite part of the day wasn’t a particular class or session.

Rather, it was waffle day in the cafeteria. On Theatre Day, even Atherton’s a stage.