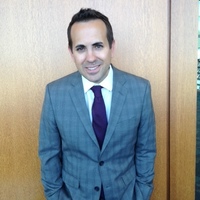 Kelly, who teaches courses in rhetoric and critical media studies and directs the university debate team, is the author of Abstinence Cinema: Virginity and the Rhetoric of Sexual Purity in Contemporary Film (Rutgers University Press, 2016). His scholarship focuses on critical rhetorics of race, gender, and masculinity in the United States. Read more about him here.

The nationally competitive award honors someone who has taken a leadership role as an up-and-coming scholar. It honors a new investigator: (1) whose scholarship sets out a new research agenda for critical and cultural studies, (2) who is an active mentor at an early stage in her or his career, and/or (3) who has been working to advocate for the interests of the Critical and Cultural Studies Division of National Communication Association.

Typically, the award goes to someone who has established themselves, through publication, as a new voice in communication and cultural studies. Nominees are evaluated by the division’s award’s committee, made up of senior scholars in the discipline.

In a letter nominating him for the award, Butler Associate Professor of Communication Kristin Swenson said, “Not only is Dr. Kelly a prolific scholar, but he is also a great mentor to his students and junior faculty.”