Vietnam is His Past, An Audi Dealership is His Future

In seven years, Steve Vong ’16 has gone from “zero” English to complete fluency in writing and public speaking.

In 2008, Steve Vong ’16 moved from Saigon, Vietnam, to Indianapolis with his parents and his older sister to join the rest of their family, who had moved here in the 1990s. Their journey was almost 9,000 miles—and Vong knew “absolutely zero” English. 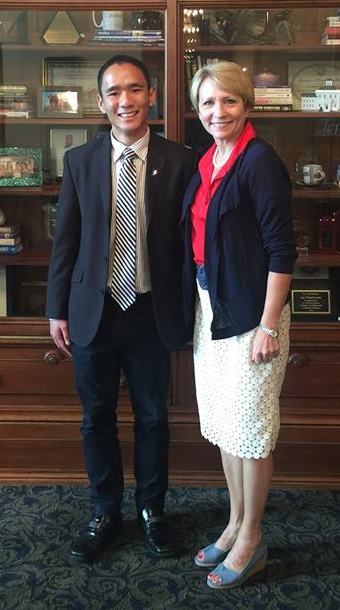 But seven years and a whole lot of perseverance and hard work later, he will graduate this spring with a degree in Organizational Communication and Leadership and a minor in International Business.

“Back in high school, when I was still trying to learn English, I thought I was never going to do anything with public speaking,” he said. “I hated writing, and I hated speaking, and now I’m good at both. It’s ironic that those are my skills.”

When he first arrived in Indianapolis, Vong “had to smile and nod a lot, because I didn’t know what people were saying,” he said. “But I thought, I’m here now, and this is what I have to do.”

Vong initially wanted to attend college out of state. But when he visited Butler his senior year, he realized he could get the college experience he wanted close to home. And when he moved on campus, he noticed that he slowly became more fluent in English.

“I interacted with a lot of people from different backgrounds and a lot of different places around the country, and that helped a lot,” he said.

Assistant Professor of Communication Jessica Moore has been Vong’s professor for several courses during his time at Butler. She says his positive attitude is contagious in and out of the classroom.

“Steve is a highly engaged student who cares a great deal about the classroom experience,” she said. “He is not only interested in maintaining an awareness of his own learning needs, but he is attuned to the needs of his peers and works hard to contribute to an active and engaged environment.”

Moore says his personality and work ethic are the reasons why she nominated him to serve as a College of Communication Student Ambassador and why he won the departmental Student Leadership Award last year.

Vong’s skillset also helped him land a communications and social media internship in the office of Governor Mike Pence this past summer. He started out in the internship helping with general writing at the office. By the end of the summer, the Senior Advisor often asked him to look over his speeches before delivering them.

Even though he loved his time in the governor’s office, Vong says he doesn’t want to become a politician or a speech writer. Though he wants to keep using his speaking and writing skills, his ultimate goal is much different. One day, he wants to own an Audi dealership.

“People ask me why I want to do that, and I say, ‘When I go into work in the morning and open the doors, I’ll see something I love,” he said.

“I’m grateful that Butler helped me figure out what I like to do, my passion.”