As far back as high school, Zachary Petit ’06 had wanted to write for magazines. But he didn’t know how to get started. He looked for an instructional book—a simple A-to-Z primer on how to do it—and found nothing. 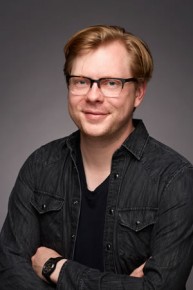 “So it’s basically one of those clichés—write the book you want to read,” said Petit, author of the new book The Essential Guide to Freelance Writing: How to Write, Work, and Thrive on Your Own Terms (Writer’s Digest Books). (http://www.amazon.com/The-Essential-Guide-Freelance-Writing/dp/159963905X; http://zacharypetit.com)

Petit approached the book from his own experiences, which started with an internship at National Geographic magazine as part of Butler’s Washington Internship Program. While there, he asked one of the staff writers how to go about writing for magazines. The advice: Go write for newspapers for 10 years. You’ll learn the skills you need for magazines.

He lasted three years in newspapers before becoming managing editor at Writer’s Digest, a magazine he’d been reading since high school. Writer’s Digest focuses heavily on fiction writing, so Petit found an opening to write the guide he always wanted to write.

As someone who’s pitched story ideas to editors, and heard his share of pitches over the past eight or so years, Petit was able to lay out, step by step, how to approach freelance writing, including identifying markets for your work, generating ideas, writing queries, and even “the terrible subject of taxes.” And he did so in a way that’s designed to be entertaining.

“I think most writing books are sort of cold, pontificating, really dry, boring, this-is-the-one-way-to-do-this-to-succeed,” he said. “So I wanted to write the anti-writing book. Approachable, hopefully funny, no b.s. guide.” 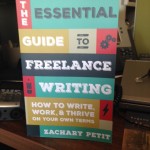 Petit, who has written for National Geographic, National Geographic Kids, McSweeney’s Internet Tendency and many other publications, had 10 months to finish writing. But most of it poured out in hourlong writing sessions after work at his current job as editor of PRINT magazine (http://printmag.com).

He still freelances (he’s shopping a novel, and he’s about to start work on another book), speaks about freelance writing at conferences, and is starting to make instructional videos about freelancing that he’ll post on YouTube.

What he really wants people to know is this: “It seems like writing for magazines is a lofty goal. It’s not out of reach. You just have to know the right way in.”