Butler captured the 2015 BIG EAST Championship Sunday afternoon with a 1-0 victory over Providence. Jamison Midgley‘s goal in the 20th minute proved to be the game-winner. The fourth-seeded Bulldogs’ run through the BIG EAST Tournament improves their record to 16-6-1. The match was played at Creighton’s Morrison Stadium. 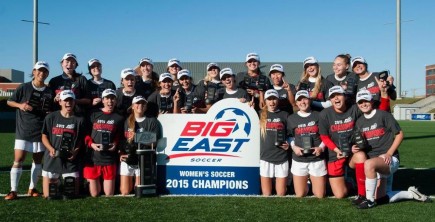 Butler’s Serina Kashimoto served in a corner kick which bounced around the group in the front of the net, including off the body of Providence goalkeeper Kristyn Shea, before Midgley had the last touch which caused the ball to trickle in the net.

“I thought we showed a nice blend today of grit and fight when needed, along with some quality composed soccer in a high pressure game,” said Butler co-head coach Rob Alman. “Coming through three games in six days against three very different but excellent teams is a fantastic accomplishment.

“We’re delighted to bring the BIG EAST championship back to Indianapolis and share it with our families, friends, fans, other programs, and the amazing support staff that make this possible for our student-athletes. The players have been fully invested and very disciplined from day one. It’s great to see their effort and dedication rewarded. We now look forward to seeing what our next challenge will be in the NCAA Tournament.”

Providence’s best chance of evening the game came in the 82nd minute when BIG EAST Championship Most Outstanding Offensive Player Catherine Zimmerman’s free kick from 10 yards outside the box hit Card square in the chest and bounced in front of the Butler keeper who had the afternoon sun shining in her eyes. Card managed to scramble and pick up the ball before a Providence player got a foot on it as the Bulldogs escaped the threat. The save was one of three in the second half for Card and one of the four she made overall. Butler managed to keep Providence scrambling over the final minutes as the clock ran out.

Card posted her ninth shutout of the season, which is a new Butler single-season record.

Midgley’s goal is the second of her freshman campaign. She also had the game-winner in the regular season finale against Xavier.  Sophia Maccagnone led the Bulldogs with four shots. Senior midfielder Randi DeLong led the Bulldog defense which allowed just one goal over three BIG EAST Championship contests en route to earning BIG EAST Championship Most Outstanding Defensive Player honors. DeLong was joined on the All-Tournament Team by fellow Bulldogs Kashimoto, Maccagnone and Shannon McDevitt.

Butler’s 16 wins set a new program record. The Bulldogs will make their first appearance in the NCAA Championship after claiming the BIG EAST’s automatic berth with today’s win. The NCAA Selection Show is set for Monday at 4:30 p.m. (ET) on NCAA.com.

The BIG EAST title is Butler’s first in any team championship since joining the league prior to the 2013-14 academic year.