Isn’t This Lovely: Butler Students to Sing With Stevie Wonder

Four members of Butler University’s Voices of Deliverance gospel choir have been invited to sing with Stevie Wonder on Saturday night at Bankers Life Fieldhouse in downtown Indianapolis. 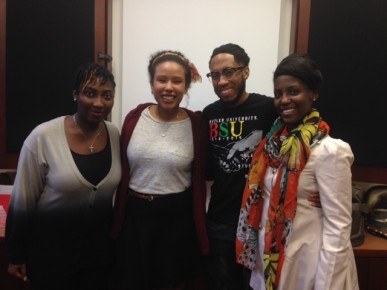 Senior Jeremy Washington, an Organizational Communications and Leadership major from Hammond, Indiana; Elisha Wright, a sophomore Exploratory Studies major from Indianapolis; graduate student RaeNosa Hudnell, a Creative Writing major from Grand Rapids, Michigan; and Murjanatu Mutuwa, a first-year International Business major from Cedar Lake, Indiana, will join the 1989 Rock and Roll Hall of Fame inductee and his band for three songs—“Pastime Paradise” and “Another Star” from his Songs in the Key of Life album and a cover of Curtis Mayfield’s “People Get Ready.”

Valerie Davidson, Butler’s Director of Diversity Programs and the faculty adviser for Voices of Deliverance, said she received a call on Thursday, November 5, from Wonder’s people, asking about singers. They told her that, at each tour stop, they like to invite local singers—ideally from colleges—to perform.

“When Miss Valerie notified me of the news, I was speechless!” Washington said. “For me, Stevie Wonder is more than just a flawless voice but a role model and symbol to the realization that nothing can hold greatness back.”

The students will be at the arena for rehearsal Saturday at 4:00 PM. At 4:30 PM, Wonder is scheduled to join them to rehearse and for soundcheck.

This is the third time in recent years that Butler students have been invited to sing with a superstar performer. In 2012, 22 members of the Butler Chorale sang with Madonna during halftime at the Super Bowl. And this past July 4, 26 members of the Chorale accompanied the Rolling Stones onstage at the Indianapolis Motor Speedway.