Daniel Comiskey, deputy editor of Indianapolis Monthly magazine, has been selected by The Butler Collegian’s staff to serve as its adviser. He will take on the role at the beginning of the spring semester.

As adviser, Comiskey serves as a consultant to problems, offers advice to the staff when it is solicited, and critiques the stories the Collegian publishes. 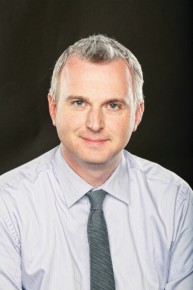 “I know it’s a transitional time for the newspaper—a new editor-in-chief, a new adviser, a digital-first format,” he said. “But all of those things are opportunities as much as they are challenges. I hope to bring stability while encouraging the ambitious reporting and lively writing that have been the paper’s trademarks for so long.”

Comiskey joined Indianapolis Monthly in 2006, shortly after completing a Master of Arts in journalism at Indiana University. During graduate school, he served as arts and culture editor of the Indiana University Alumni Magazine and reported for the Bloomington Herald-Times. Comiskey’s long-form features have won a number of Society of Professional Journalists Awards, and have taken him across the country in a semi truck, to the sites of natural disasters, and inside New York City Hall.

Comiskey grew up around newspapers. His mother, Nancy, was Deputy Managing Editor at the Indianapolis Star and now teaches at Indiana University.

And, he lives a block from the University, “so I’m already part of the Butler community in a way,” he said. “It makes sense for me to have a relationship with the place.”

Katie Goodrich, who will take over as Collegian Editor in Chief for the spring semester, said Comiskey “will bring lots of knowledge about embracing the digital realm, since Indianapolis Monthly transitioned to a heavier web presence while he has been there. This will be very valuable as we build our online community. He seems very enthusiastic and optimistic about the Collegian’s future, and I am excited to work with him as we both enter new roles.”