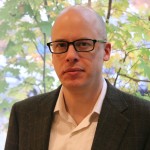 Grossman’s Magicians trilogy, a New York Times #1 best seller, has been published in 25 countries. It was recently acquired by NBC/Universal for a television series, with a pilot episode officially ordered for the SyFy channel. For the past decade, Grossman has been both the book critic and the lead technology writer at Time, covering virtually every cultural and technological revolution of the new millennium. (A graduate of both Harvard and Yale, he was the first journalist to make a call on the iPhone!)

When Time chose “You” as its Person of the Year 2006, Grossman wrote the story; he did it again in 2010, covering Mark Zuckerberg. Grossman has interviewed and profiled the major drivers of cultural change in the Internet era, from Steve Jobs to Jonathan Franzen to John Green. He has also written for Wired, The Believer, and The Village Voice and many others.