And Now, Some Parting Words From Your Professors

Four Butler professors were asked to give their “last lecture” to graduating seniors. Here’s what they said.

If you were a college professor giving seniors their final 20-minute lecture, what would you say? 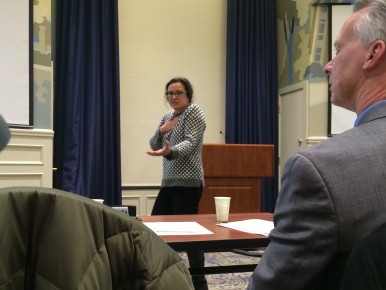 National college senior honor society Mortar Board posed this question to four Butler professors, who then presented their “last lecture” on Thursday, December 3, to about 60 students.

Chemistry Professor Stacy O’Reilly took a scientific approach. She explained how Gore-Tex is made from petroleum for use in ski coats. She said students should be aware participants and consumers as they head out into the real world.

“Remember that everything you use comes from somewhere and from someone,” she said.

Christine Smith, an Adjunct Professor in the Core/First-Year Seminar, wanted students to reflect on their life’s purpose and to live unapologetically.

“For being yourself, you don’t need to apologize,” she said. “If I never have, why should you?”

And Journalism Professor Scott Bridge just wanted his students to know how much they mean to him.

“I would want students to know how much they have meant to me and how I will continue to help them long after they’ve graduated,” he said.

All professors agreed that, although it was daunting to prepare for their theoretical last lecture, they were glad to participate.

“It was an honor to hear their varied life perspectives in such an intimate setting,” Ashley Zegeistowsky ’16 said. “I’ve never had one of the professors for a class, but it was still really cool to listen to their lectures.”