Learning About Service, the Butler Way

At first, the concept seems difficult. How do you help third-graders understand what service means?

But for Early and Middle Childhood Education Professor Arthur Hochman and his early elementary education class, the challenge is often the most important part of the lesson plan. 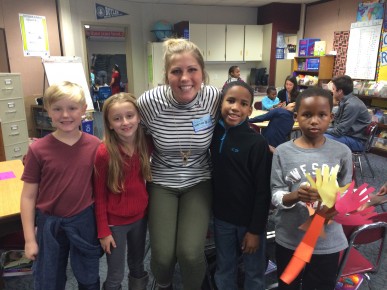 Kat Welch ’17 and her students.

“Every semester I like to work with a local public school in coming up with something special that’s going to have a feeling of culmination and importance, so that these third-graders will have an experience they will never forget,” Hochman said.

In past years the projects have varied. Students and children have organized a flash mob to honor a teacher or come to Butler for a day to present research they’ve done.

This year, the lesson took a different turn as the third-graders worked together to create their own magazine called Helping Hands. It was published within another local kids magazine, Inspired.

Kat Welch and ’17 and Allison Behling ’18 are two of Hochman’s students who worked at Crooked Creek.

Under the guidance of teachers such as Megan Shuck Rubey ’12 and Kristen Vannatta, they helped students create artwork, conduct interviews, and come up with ways to serve their teachers.

Welch’s group created an autograph book for one teacher and wrote a poem for another.

“It was neat to see how it was really important to them that the teacher liked it and that it was special for them,” she said. “We made a point to teach them that it was anonymous. At first they struggled with that, but then came to realize it’s more about the act of doing than getting recognition.”

Hochman said the children are motivated to work on a deeper and higher level when there is an incentive of being able to achieve something important, such as serving and creating an actual published magazine.

“It’s the idea of getting kids to do work that’s in context, that’s real,” Hochman said. “It gives you an impetus to do great work, as opposed to ‘You need to learn multiplication so you can learn division so you can learn algebra,’ which when you’re little feels a little hollow. 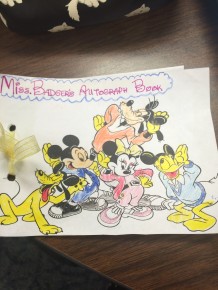 After finishing the magazine and sending it in for publication, the Butler students returned to surprise their third-graders on the final day. The students gathered to see their final product projected up at the front of the classroom, and a special guest even came to visit: Trip, the Butler bulldog mascot.

Together, they celebrated their published magazine and the new bonds formed between the Butler students and their third-graders.

“We had third-graders crying,” Hochman said. “The attachments are very real.”

“It was very sweet,” Behling said. “But I think I was even more excited about Trip than they were.”

Not only did they come away with new friends, Behling and Welch said they came away with teaching experiences they will never forget.

“For me, I loved seeing the progress that was made,” Welch said. “The first or second day we were there, we asked them what service was. They all said out of order signs or drew stores. But by the end of the project, they talked about how it was important to do things anonymously for others.”

Behling said she noticed even more changes in herself.

“I kind of went in expecting for me to have my place, for everything to go my way, and obviously that doesn’t always happen, especially with kids,” Behling said. “My biggest takeaway was not everything has to go right the first time and sometimes you just have to try again.”