Former Indiana First Lady Judy O’Bannon Willsey urged the 93 graduates at Butler University’s winter commencement ceremonies to embrace the opportunities ahead of them.

“It’s a temptation to think on a day like today, when the news looks glum, that we are rushing to disaster as never before,” she said on Saturday, December 19, at Clowes Memorial Hall. “We’ve always had hazards, but … we have new, great, never-before-dreamed-of opportunities.” 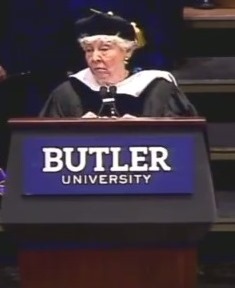 O’Bannon, whose husband Frank was governor of Indiana from 1997-2003, said the challenges can seem daunting and the world bleak. But from the cavemen on, human beings have always been able to deal with whatever came along.

“Today, think of what you’ve got, graduates,” she said. “A pretty stable society. You’ve got the rule of law. You’ve got the scientific method. You’ve got a lot of information that people have gathered through research and study and experiences of the past. And you have the microchip. And a Butler University degree. You are better equipped to deal with this changing, complex world than any generation that has ever come along.”

Danko asked the graduates, who are part of a class that contributed more than 100,000 hours of community service, to “continue to allow the Butler Way to inspire you.”

“Continue to serve your families, your friends and your communities as you have done here at Butler University,” he said.