Three world premiere pieces—including a work that guest choreographer Lesley Telford created specifically for the Butler Ballet graduating class of 2016—and performances by students from the Dance Conservatory of Eva Jaczova in Bratislava, Slovakia, highlight Butler Ballet’s Midwinter Dance Festival, February 10-14 at the Schrott Center for the Arts.

Tickets are $10 for students and children up to age 18, $15 for seniors 62 and older, and $20 for the general public. They are available through schrottcenter.org. 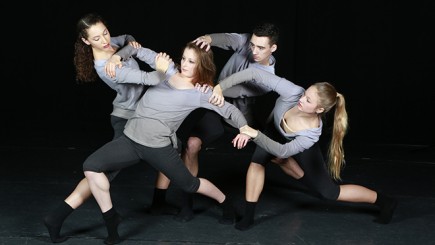 “Midwinter is the concert where we can really reach out into original work by the faculty and give students the chance to work with choreography that’s never existed before,” said Larry Attaway, Chair of Butler’s Dance Department. “We can also work stylistically in several areas simultaneously. It’s an excellent view of the overall picture of dance.”

The idea for the Telford piece, “Anamnesis,” which will be the closing work in every Midwinter show, took shape after she visited Butler in the fall. She was asked to create a piece for the 21 graduating seniors. The work she has created utilizes text by Canadian poet Barbara Adler. Associate Professor of Dance Derek Reid is the ballet master for “Anamnesis,” which is another word for reminiscence.

“It’s a wonderful piece,” Attaway said, “and it’s really nice to see all the seniors together. It will give them an opportunity to experience the kind of work we know we’re about to send them out to do in companies.”

Telford, now a freelance choreographer, performer and teacher, has danced with the company Les Grands Ballets Canadiens and Nacho Duato´s Compañia Nacional de Danza in Madrid, Spain. From 2001 until 2010, she danced with the Netherlands Dans Theater 1, where she worked and created with world-renowned choreographers including Jiri Kylian, Paul Lightfoot and Sol Leon, Crystal Pite, William Forsythe, Ohad Naharin, and Johan Inger.

“Enigma Variations” was originally choreographed in 2004 by Dance Professor Stephan Laurent to Sir Edward Elgar’s Variations on an Original Theme, op. 36, ‘Enigma.’ This will be the second restaging, and first in the more intimate Schrott Center setting.

“Traversì,” (the Spanish word for path), is a brand new work by Dance Professor Marek Cholewa set to the music of Panamanian composer Dino Nugent. It’s about the struggle teenagers have in finding their way in today’s difficult society.

Guests from the Dance Conservatory of Eva Jaczova in Bratislava, Slovakia, will perform three pieces: “Pizzicato” from the ballet Sylvia; “Little Amor Variation” from the ballet Don Quixote; and “Largo,” an original work choreographed by Bachram Yuldashev to music by Bach. In 2015, the Butler Department of Dance sent a group of students to perform in Slovakia to celebrate the conservatory’s 35th anniversary. This year, the Dance Department Butler returned the invitation.

“Riverrun,” choreographed by Dance Professor Cynthia Pratt to music by John Luther Adams, is an outgrowth of “Streamlines,” which premiered in September at the Holcomb Gardens. “Streamlines” is an interactive, place-based project that merges the sciences and the arts to advance the community’s understanding and appreciation of Indianapolis’ waterways. “Riverrun” uses movement to convey images of specific characteristics and concerns of our waterways.