Betsy Shirley ’10, an assistant editor with Sojourners magazine, has been named one of 28 Religion Newswriters Association’s Handa Fellows in Interreligious Communication, an achievement that will help broaden her knowledge of religion and the scope of her coverage. 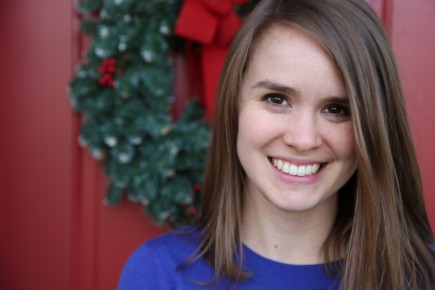 “The fellowship helps younger reporters cover religions that aren’t Christianity or Judaism with much more depth and nuance,” she said. “When it comes to covering religion, we need reporters to be especially well trained in some of the religions that haven’t been as well represented.”

Shirley has been a writer and editor for Sojourners, which focuses on faith and social justice from a Christian perspective, since finishing her Master of Divinity at Yale Divinity School in May 2015. She said her interest in religion was stoked at Butler, which she chose for several reasons: She wanted a liberal arts education; her great-grandparents and her father were graduates; and in researching schools, she found that Butler rated high among students on a “happiness index.”

“In that the first class, even the first week, we were out in Indianapolis observing a religious tradition that was very different from our own,” Shirley said. “I was assigned Sikhism and we were out talking to people who practice that religion. As someone who now works writing about religion and covering religion, that was especially valuable experience.”

After graduation, Shirley did a yearlong internship at Sojourners as an editorial assistant, then headed to Yale.

“I liked working at Sojourners and knew if I wanted to do this long-term, I needed a broader background in religion,” she said. “You need to be able to know what is a meaningful story and what is just Internet buzz.”

At Yale, she took courses in subject areas such as church history, biblical interpretation, and theology, as well as classes in other disciplines. That prepared her to cover stories like the Gay Christian Network Conference (a meeting of 1,500 LGBT Christians and allies), the role of hospital chaplains during the Ebola scare, and how a Los Angeles pastor uses karaoke to spread the gospel.

“I’ve had a lot of great training in religion,” she said, “but religion is complex and it deserves extra resources and training to fairly interpret it.”