World Premiere of Vonnegut Opera to Take Place at Butler

An opera version of Kurt Vonnegut’s Happy Birthday, Wanda June, written by Vonnegut and Butler Director of Instrumental Activities Richard Auldon Clark, will have its world premiere performed by Indianapolis Opera, September 16-18 at the Schrott Center for the Arts. 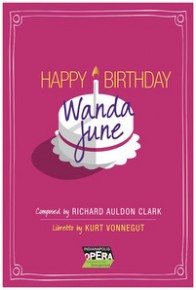 “Kurt always thought Happy Birthday, Wanda June would make a great opera, and I was thrilled when he presented me his only play to create this new work,” Clark said. “It was his wish that the story and his words be of great significance and that the music would really enhance rather than supersede it. I know Kurt would love this new opera and would be thrilled that it was being premiered in Indianapolis, his hometown.”

Clark’s work with Kurt Vonnegut began in the early 1990s when they created new works based on Breakfast of Champions, Mother Night, Cat’s Cradle, and Fates Worse Than Death.

“Kurt Vonnegut was not only a great friend and collaborator, but also the most significant influence on my professional life,” Clark said.

Happy Birthday Wanda June began life as a play by Kurt Vonnegut in October 1971 at New York’s Theater de Lys. The play was Vonnegut’s first attempt at a stage work. Written to protest the Vietnam War in 1970, the play blends the sacred and the profane to produce off-the-wall and strangely funny satires.

Wanda’s plot is based loosely on the Greek legends of Odysseus and Penelope – it involves the unexpected return of a mercenary career solider/hunter named Harold Ryan and his wife, Penelope. When Harold left Penelope, she was a ditzy carhop; when he returns after eight years lost in the Amazon, he finds that she has gone to college, majored in English lit and changed her attitude about the macho man she married.