He commuted to Butler in his Model T Ford, walked around campus when the only buildings were Jordan Hall, Butler Fieldhouse, the Phi Delta Theta house, and the Campus Club, and played on the Butler baseball team with Oral Hildebrand, who pitched in the major leagues from 1931-1940.

He’s Sam Arnett ’33, believed to be Butler’s oldest living graduate. And on February 25 he turns 105. 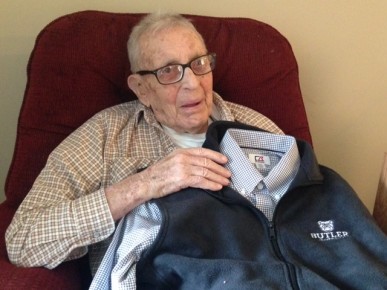 Sam Arnett shows off one of his birthday gifts, a shirt and vest from Butler.

Back in the day, he grew up in Indianapolis and went to Tech High School with thoughts of being in pharmacy like his father.

So he came to Butler, where he majored in Business Administration. Butler “was a very enjoyable place to go to school,” he said.

He remembers Tony Hinkle as a nice man (“I never heard a word against him”) and describes his time at Butler like this: “We attended our classes, we made our grades and played baseball.” He was a “good enough” outfielder.

After graduation, Arnett went on to Purdue University for a second bachelor’s degree and a master’s, then went to work for Eli Lilly and Co., retiring after 41 years. He moved to Florida for 20 years, then returned to Indiana to be closer to his family.

These days, Arnett lives in at Wellbrooke of Westfield, an assisted-living facility, where he keeps a Butler pennant on his wall and copies of The Drift, Butler’s yearbook, and clips from The Butler Collegian nearby.