David Campbell’s talk at Butler University on April 7 has the mysterious title “FPU and the Birth of Experimental Mathematics.”

But there’s an element to FPU—which stands for physicists (Enrico) Fermi and (John) Pasta, and mathematician (Stanislaw) Ulam—that’s both simple and captivating. Campbell says it boils down to this: If you spilled water from a glass, could you get it back in? 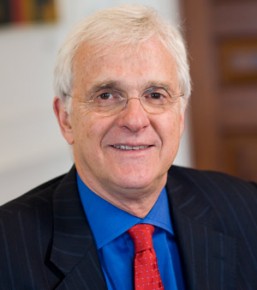 The Phi Beta Kappa Visiting Scholar will answer this fully on April 7 at 7:30 PM in the College of Pharmacy & Health Sciences Building, Room 150. Admission is free and open to the public. His talk is sponsored by Butler’s Theta of Indiana Phi Beta Kappa Chapter, and co-sponsored by the Center for High Achievement and Scholarly Engagement and the J. James Woods Lecture Series in the Sciences and Mathematics.

For now, here’s a summary:

“You take a simple pendulum on a grandfather clock, you watch it going back and forth, and you make a movie of it,” he said. “If you run the movie backwards, you can’t tell whether it was backwards or forwards. That’s called reversibility in time.

“Now take a glass of water. Make a movie of it as you pour it out. Run that movie backwards. Can you tell the difference?

“Of course you can, right? You say, ‘Of course,’ but it’s not obvious how we get from microscopically reversible to macroscopically irreversible. That’s the question. It’s called the ‘Arrow of Time’ question.

In looking at the question, Fermi, Pasta, and Ulam started with an initial condition—water in a glass—and started trying to pour it out, Campbell said.

This result, known as an FPU recurrence, led to a deep understanding of non-linear problems and—more important to the general public—advances in areas such as telecommunications.

Campbell also will meet with students and faculty of the College of Liberal Arts and Sciences and is delivering the keynote address at Butler’s Undergraduate Research Conference on April 8.