The Next Butler Theatre Show? It’s Up in the Air

Sarah Tam ’17 knew she’d get a well-rounded education at Butler, but learning to fly? Not what she expected.

“Flying is pretty awesome,” said Tam, who takes to the air as the title character in Butler Theatre’s production of Karlsson on the Roof, February 18–21 and Feb. 25–28 in Lilly Hall Studio. “Once you get the hang of how it feels to be lifted, it can be really magical.” 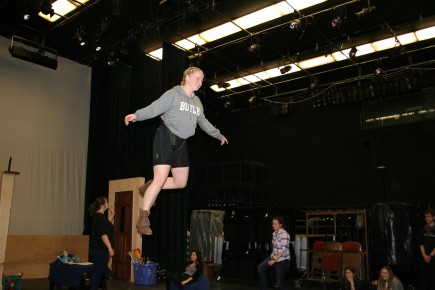 Sarah Tam is learning to fly. (Photos by Tess Chadwick)

Karlsson, a comic tale of childhood by Astrid Lindgren, known for her Pippi Longstocking series, tells the story of a lonely boy called Smidge. One day, Karlsson flies through Smidge’s window to be his friend. They get into all kinds of shenanigans together, but no one believes Smidge when he says that Karlsson is real.

For Tam, a Theatre major and English Writing minor from Columbus, Indiana, mastering the art of flight has been a step-by-step process. At first, she said, it felt like she was being dragged around in the air. But, as rehearsals have gone on, she’s gotten better. She now knows what to expect and how to manipulate her body around the harness and wires.

Getting Tam airborne required more than faith, trust, and pixie dust. It started with rigging hooked up by Troy Trinkle, who runs a local flying-effects company, Flying by Troy. He installed a system designed to make her flight look as natural as possible given the limited confines of the Studio Theatre.

“In a show like Peter Pan, we rely on gravity and body mass” to lift the actor, Trinkle said. “They don’t keep them in the air too long. But this show, we approached it with the thought that the character has a mechanical appendage, a propeller, so it wouldn’t be quick up and quick down. It would be nice and slow. So that’s the kind of flying we’re doing.”

Handling the rigging for the show will be Rebecca De Tar, a senior Theatre major and German minor from Indianapolis, and Bram Sheckels, a senior Arts Administration and Theatre major from Cincinnati, Ohio. De Tar has experience flying people—she worked on Tommy at Footlite Musicals in Indianapolis. She said the fly rig they’re using for Karlsson is a counterweight pulley system that makes lifting Tam a bit easier than if they were lifting her full body weight.

Sheckels is in charge of Tam’s vertical motion, and De Tar handles her horizontal motion. 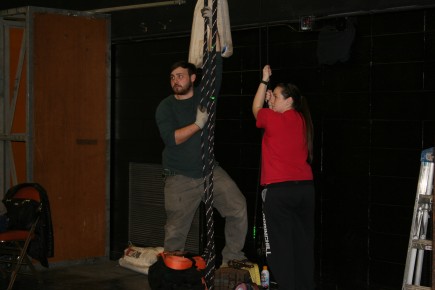 Bram Sheckels and Becca De Tar are at the controls.

“If any of the three of us are off in the time timing,” De Tar said, “then Sarah won’t fly as smoothly.”

And that, said Trinkle, is what audience members often fail to recognize—that getting a performer to fly is a painstaking process.

“People underestimate that—that it’s only technical and it’s not artistic,” he said. “When I started talking about this last year with the production team, I said that, if you want movements to be fluid and make sense, you have to be willing to devote as much time to the flying as you would be willing to devote to learning the lines and walking through the blocking.”

Tam said audience members will see that she and the rest of the cast and crew have done just that.

“Karlsson has been a fun, challenging show,” she said, “and I’m looking forward to opening.”