Butler University’s Center for Urban Ecology will place 48 motion-sensitive cameras at locations in Indianapolis, Westfield, Zionsville, and Carmel for four weeks every quarter beginning in April to study urban wildlife.

The Indy Wildlife Watch project is being done in conjunction with the Lincoln Park Zoo Urban Wildlife Institute in Chicago and the University of Wisconsin-Madison to see how central Indiana wildlife compares with theirs. Researchers also will be looking to see how the habitat compares in different neighborhoods. 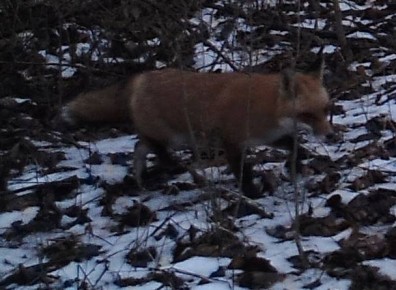 For the past five years, the Urban Wildlife Institute has been undertaking a groundbreaking study of Chicago’s urban ecosystem, using camera traps and acoustic monitors to track the behavior of bats, birds, coyotes and even humans. The pictures can be seen at http://www.chicagowildlifewatch.org/.

“The Urban Wildlife Information Network and these new camera-trap sites will provide a wealth of knowledge about not only wildlife but the ecosystem as a whole,” Lincoln Park Zoo Urban Wildlife Institute Director Seth Magle said. “We’re grateful to the University of Wisconsin and Butler University for this vital support, which will help everyone better understand wildlife and, subsequently, mitigate conflict between humans and animals.”

The cameras are held in metal boxes to shield them from the elements and camouflaged so they’re not an eyesore on the landscape. They are strapped around the trunk of a tree and secure with a cable and a lock. The cameras are pointed at another tree 10-20 feet away where a scented lure is attached. When animals stop to investigate the lure, they trip the motion sensor in the camera.

The cameras are capable of taking a picture every 30 seconds. The pictures are stored on memory cards that will be collected and replaced every two weeks.

In January, Butler’s Center for Urban Ecology tested about 18 cameras. Biology Professor Travis Ryan said the best pictures so far have come from the area around the Monon Center in Carmel, where deer, foxes, coyotes, squirrels, and rabbits triggered the camera.

A sampling of those pictures is now available on Twitter (@indywildwatch) and Facebook (Indy Wildlife Watch). Beginning in 2017, all the pictures from central Indiana sites will be posted on a website for the public to view and help identify the contents of the photos.

“We envision students playing an important role in the field and when we get back with the data,” Ryan said.

“The reason we reached out to Carmen and Travis and others is because to us, the next step is to say how many of the patterns that we see are specific to individual cities and how many are universal,” Magle said. “If we can identify universal patterns in urban wildlife, then that’s incredibly powerful for policy, for planning, for green infrastructure, for all sorts of things.”