Butler Newsroom > Uncategorized > The PA Program at 20: Many Reasons to Celebrate
Good Practice, And An Even Better Public Service Butler Hosts the 24th Annual Bulldog Jog

The PA Program at 20: Many Reasons to Celebrate

Stacy Dawkins ’01 thought she might want a career in medicine after graduating from Indiana University-Bloomington as a Chemistry and English double major. Physician Assistant (PA) was not on her list—mostly because she’d never heard of it.

But the Anderson, Indiana, native had a friend in the program at Butler University, and the friend convinced her that she belonged in the PA program.

Fast-forward 15 years, and Dawkins now boasts an impressive work history that includes seven years in cardiology, three years in internal medicine, and, these days, emergency medicine work at St. Francis Hospital Center on the south side of Indianapolis. She has also served as an adjunct instructor for Butler in the past and currently lectures at another PA program.

“The flexibility in being a PA is wonderful,” she said. “I’ve gotten to be part of three different areas of medicine.”

It’s stories like Dawkins’s that will be celebrated on April 22 with a daylong free continuing medical education conference for alumni and a dinner celebrating the 20th anniversary of the PA program.

The program, which educates healthcare providers to practice medicine on teams, started as a joint program between Methodist Hospital and Butler, with 2.5 full-time faculty members and 8 students working toward a bachelor’s degree. At the time, there were no other PA programs in Indiana and only 55 in the country. 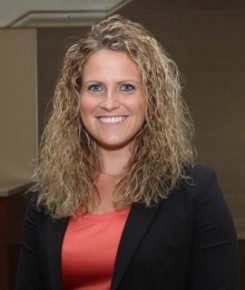 Maggie Doty graduated from the PA program in 2015

In 2008, Butler became the sole sponsor of the PA program. Today, the program is a master’s degree-only curriculum taught by 9.5 full-time faculty. It will graduate its 710th student in May. Statewide competition has expanded to include University of Saint Francis, Indiana University, and Indiana State University, with four more schools opening programs in the near future.

Jennifer Snyder, who graduated from the program in 1997 and now serves as the program director, said Butler and Methodist recognized that there was a need for a profession like PA to help increase the number of medical providers, fill a gap in the healthcare community, and increase access to care.

Snyder said PAs choose to be PAs for a number of reasons:

-Flexibility. PAs are trained as generalists. They can go into whatever field they choose and change specialties if they want.

-No residency. PAs don’t have to do a residency or take the board exams associated with a specific field. They are nationally certified and state licensed to practice medicine in every medical or surgical specialty and prescribe medication. To maintain national certification, PAs are required to complete 100 hours of continuing medical education every two years and recertify as medical generalists every 10 years.

-Faster development. PAs earn their degrees in two years, rather than four, allowing them to graduate and get into the workforce quickly.

-Collaboration. PAs collaborate with physicians. A PA’s scope of practice typically grows over time with clinical experience. A PA often serves as the lead on care coordination teams and sees patients in all settings without a physician present. In fact, in some rural and underserved areas, a PA may be the only local care provider, collaborating with a physician in separate location via telecommunication.

Butler’s PA program was built in part on word of mouth. Just as Dawkins heard about it from a friend, Rob Estridge ’08 called Dawkins, whom he knew, to ask about her experience. Estridge had worked as a nursing assistant through high school and as a pre-med undergrad at Miami (Ohio) University. A few years after graduation, he shadowed a PA at Johnson Memorial Hospital in Franklin, Indiana.

“He was doing all these procedures—everything a physician would do—but he didn’t have all the burden of being the one in charge,” Estridge said. “But he still practiced medicine to a strong degree and had all this autonomy. I thought, ‘This is what I want to do. I don’t care if I’m the one in charge. I just want to be part of the team.’ PA just fit so well.”

“I wouldn’t have gotten anywhere if it wasn’t for Butler,” he said.

Megan Wesler ’13 started at Butler as an undergraduate and went straight through the PA program after being accepted as a sophomore. She had thought about going to medical school, but opted for a career with more flexibility.

Since graduating, she’s worked in the emergency medicine at Community Hospital North and Community Hospital East, Indianapolis, where she sees patients with everything from sore throats to heart attacks. The way her schedule is organized, she works 10- or 11-hour shifts six of every seven days, then has five consecutive days off. In a typical month, she only works about 15 days, which allows for a work-life balance she likes.

“I feel like I was very well prepared for my career,” she said. “They talked a lot in school about how much on-the-job training there would be, but I feel like the skills I graduated with and the tests we took were a great foundation that allowed me to acquire a lot of skills.”

Maggie Doty ’15 said the opportunity for work-life balance attracted her to PA as a profession. Being part of the Butler program sealed the deal. Today, the Minnesota native works in outpatient internal medicine at Johnson Memorial Hospital. She also is an adjunct instructor at Butler, helping with the Health Care Communications class and sitting in on panels for the incoming PA classes.

“There was never a rotation site I went to during our clinical rotation year where our preceptors and supervising physicians didn’t recognize Butler students and how we stood out,” Doty said. “I didn’t really know until I started getting out into the community about how well known Butler’s PA program is.”

That—and more—is what they’ll be celebrating in April.

“We want to celebrate who we are and what we’ve become,” Snyder said. “Our graduates have really helped shape the program. We’re going to look back and celebrate it.”