Butler track and field standouts Olivia Pratt and Erik Peterson punched their respective tickets to the NCAA Outdoor Track and Field Championships with strong performances at the NCAA East Regional in Jacksonville, Florida, on May 26. 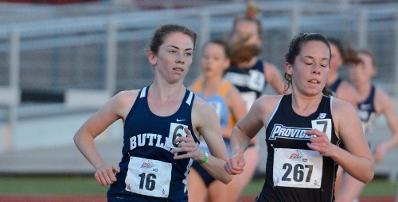 Pratt finished eighth in the 10,000 meters, easily taking one of the 12 spots that automatically advance to Eugene, Oregon, and the NCAA championships June 8-11. The East Regional produces 12 qualifiers who will be joined by 12 qualifiers from the West Regional (taking place this weekend in Lawrence, Kansas).

Pratt finished with a time of 34:26.30. The Butler veteran ran a smart race to qualify as the final time was well off her season-best run of 33:08.31 that entered the weekend ranked seventh in the NCAA. Tara Jameson of Iona won the event in 34:10.54. The 12th-place finisher was 15 seconds behind Pratt.

Peterson also showed his experience in the men’s 10,000 meters, applying less effort while solidifying a spot in the Eugene field. Peterson entered with a time of 28:44.18, which is the third-best time in the NCAA this season and was the top-seeded time in the East Regional. He cruised to a fifth-place finish in a time of 30:04.21. He utilized a strong kick in the last 200 meters to cross with the lead pack.

Campbell’s Amon Terer won the event with a time of 30:03.00; the 12th-place finisher crossed the line less than three seconds later.

Laura Riches will compete in the 3,000-meter steeplechase Friday night at the NCAA East Regional, looking to join her teammates at the NCAA Championships in Eugene next month.