In many ways, from participating in Pinewood Derby to playing near construction sites, Associate Professor of English Chris Forhan’s suburban Seattle childhood had a Leave It to Beaver-like quality.

But then, Ward Cleaver wasn’t an undiagnosed manic depressive who took his own life when the Beaver was 14. 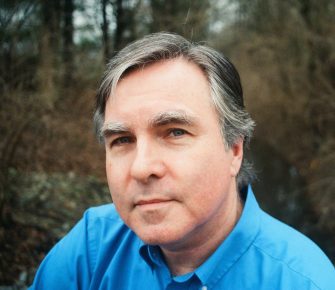 The happy and the horrible times of Forhan’s youth—and what happened after—are the subject of his starkly honest memoir, My Father Before Me (Scribner, $26), which comes out June 28.

Chris was the fifth of eight children born to Ed and Ange Forhan. His parents never talked about personal or emotionally difficult topics, and there was a lot of family history he didn’t know. So in 2010, he began researching—interviewing his mother and siblings, scouring Ancestry.com, the Seattle Times archives, and other Internet sites to glean what he could about his father.

“My reading of it was that his interior life drowned him,” said Forhan, who joined the English Department faculty in 2007 as a poetry professor. “He was in some ways a wonderful father. He didn’t beat us, didn’t yell at us. We had security. He paid the bills and made sure the car ran OK. But emotionally, he didn’t contribute much.”

What Forhan uncovered in his reporting and writing is in many ways an ordinary story about families and family dynamics. The specifics are unique to the Forhans, but the themes are universal.

“I generally do believe—and I feel this way as a writer and a writer of poetry—that the further inside yourself you go, the more you meet everybody else,” Forhan said. “Even with all the talk about diversity and putting yourself in somebody else’s skin, we do have basic human similarities. I hope the memoir touches on that.”

During an interview in his Jordan Hall office, Forhan talked more about the book and his family.

Q: Tolstoy wrote: “Happy families are all alike. Every unhappy family is unhappy in its own way.” What do you think made your family uniquely unhappy?

A: I don’t know that we were uniquely unhappy. And you know that Tolstoy quote is famously controversial—easily quotable but not necessarily true. To push against your question, I hope that we were representative. I think my parents are representative of certain values and habits of the culture they came from and the generation they were a part of: two Depression era babies. My father was Irish Catholic and my mother, while not particularly religious as she was growing up, came from a Scandinavian background. Those two cultures are just generally known as cultures that nurture repression and deflection. But I think my parents are representative of a time and a place and certain cultures.

My father, though, had a particularly horrific upbringing. His father abandoned him and his brothers and mother. His mother I don’t know a lot about because he didn’t say a word about her to us. I infer that she was not completely dependable as a mother. And his little brother drowned at 5, when my father was 7, and then his mother died when my dad was 11. All he knew, it seems to me, was loss and instability in his childhood. Then he was raised by grandparents who were caring but distant and put a lot of responsibility on him to be the good boy, the successful boy—whatever that might mean. And he came from a generation that was about not looking inward. So he had particular demons that I don’t think he confronted sufficiently. And then he got sick—he got diabetes. He seemed to be manic depressive, but probably not diagnosed as such.

My mother was exceedingly strong. She kept a stiff upper lip to the degree it was possible and always made sure the trains ran on time. She helped shelter us eight children from the worst of our father. We were happy in our own way. There was great joy. But the unhappiness had to do with that silence and mystery. We were just hunkered down in our rooms. My brother and I talk about how we kept our heads down. That’s how it felt.

Q: Your memoir is different from a lot of others in that the typical memoir is someone’s recollections. In your case, there was a lot you didn’t know, and you had to do reporting to find out. What was that process like?

A: That was fun. And I’m sure I would have not written the book if a lot of research had not been involved. That was what compelled me to write the book. I wanted to figure out my father. I came to a point in my life—I was turning 50—where I said, “What was that, anyway?” It seemed like history. There was this historical period that obviously affected me and was still in memory, but I had never figured it out and I was very curious. Who was this man? Who were the people who came before him and might have made him who he was? I really wanted to figure him out. And through that research, I came to know him in a way I never had before—as if he were still alive.

Q: In the chapter immediately after your father commits suicide, you have direct quotes from your mother and your siblings about their recollections. What was it like to gather that?

A: I felt that was important to do. I know it’s my memoir—I told my mother and all my siblings that I was doing this project—but I did understand that this was something that happened to my family. There were eight children and we were all different ages, so we had different experiences. My sister Theresa was 24 when my dad died and my little sister Erica was 5. Different experiences completely. So I thought it was important to open up the windows of the book and let the air come in. All these different voices, different perspectives. So I wasn’t pretending mine was the only experience. And secondarily, I wanted to give my siblings that gift. I knew he was their dad, too, and here was a chance for them to say what it was like for them.

Q: How comfortable were you in divulging personal details about yourself?

A: Pretty comfortable. When I decided to write this, I was all in. The most embarrassing thing I described was receiving a phone call at the high school radio station where I worked and swearing at the caller, thinking he was a prankster friend of mine. Just a stupid kid mistake. I still feel intensely guilty about that. But I felt OK otherwise. I wondered how my mother would feel about my telling the story of her life. And I was so honored and feel so lucky. She never said, “Don’t tell my story. Don’t tell the details.” She shared the details with me and she knew very well I would use them. She just asked me to change a couple of things that were factual errors or about which she had a different memory than I did. So I haven’t felt conflicted about sharing my experiences. This was a theme of the book. I was tired of the silence. So why not share it?

Q: I was surprised that after your dad’s suicide and the family’s memories, the book goes back to being your story. He’s part of the story, but he doesn’t become a distraction.

A: That’s a nice way of saying that the book is incoherent (laughs). His silence in some ways became my silence, and the last third of the book is about me dealing with that silence. Writing the book is a way of counteracting that silence, but it’s also about finding poetry—a way to use language to communicate what is real instead of to obscure it.

Q: What do you think your father would think of the book?

A: I’m not making this up—sometimes, when I was writing the book, and I was deep into it, and I was confronted with some riddle about him—I thought, well, I’m going to call him up and ask him. I really had this sense that he was so real to me and so alive on the page. But of course, if he were alive, I wouldn’t be writing the book.

I have no idea what he would think. One part of me thinks he would be embarrassed and find it presumptuous of me to do what I’ve done. On the other hand, would he be the 85-year-old guy who’s got some perspective on his life and actually would find it touching that I would devote attention to his life in this way? I wish I had a pithy answer, but I don’t.

Tagged with → "My Father Before Me" • Butler University • Chris Forhan
Please share it!