Butler All-American Erik Peterson has earned a spot in the upcoming U.S. Olympic Team Trials – Track & Field. He’ll join 23 of the best runners in the country in the 10,000 meters on Friday night, July 1, 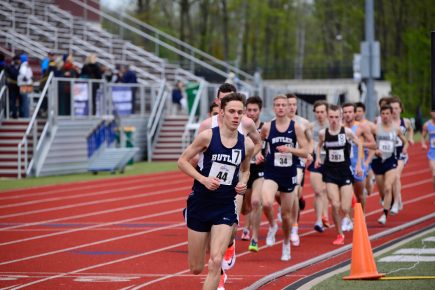 in Eugene, Oregon. The field was set late Monday night.

The men’s 10,000 meters final highlights the first day of competition in Eugene, with the event set to begin at 6:15 PM (Pacific, 9:15 p.m. Eastern). NBC Sports will provide coverage of the Olympic Trials throughout the week.

“For Erik to rise to this level from such modest beginnings is a testament to his remarkable work ethic and his consistency,” said Butler head coach Matt Roe. “Much like his stride, he is a moving picture of economy and efficiency. He does exactly what he needs to do, when he needs to do it, exactly as prescribed. He never wastes a step, and equally as important, he never overthinks it. Erik is as steady and as consistent as any athlete I have ever coached.”

Peterson is the youngest runner in the field and the only with remaining collegiate eligibility heading into the 2016-17 academic year. He turned 22 just two weeks ago. Peterson was also the youngest in the field when he competed at the 2015 USA Track & Field National Championships in Eugene almost 12 months ago.

“Most of the men in the field are full-time professionals in their late 20s to early 30s,” said Roe. “That is the peak age range for an elite distance runner. Beyond sheer talent, it takes tens of thousands of miles of running volume to get to the Olympic Trials 10,000 meters. Recent athletes who have qualified for this race around Erik’s age have almost universally been phenoms, guys like Galen Rupp, Dathan Ritzenhein, and Chris Derrick.”

As a frame of reference, Peterson is one month younger than Rupp was when he first ran in the Olympic Trials in 2008.

Earlier this month, Peterson earned All-American honors by finishing eighth in the 10,000 meters at the NCAA Championships.