Two New Members Elected to Board of Trustees

Two Butler alumni, Aaron Schamp ’93 and Beth Morris ’78, have been elected to the Butler University Board of Trustees.

Schamp, who will serve a three-year term, is a partner with PwC (PricewaterhouseCoopers, LLC) based in Indianapolis, where he currently serves as the Midwest Regional Leader for Cybersecurity, Privacy and Advanced Compliance and Risk Analytics. He joined the firm of Coopers & Lybrand as a manager in 1998, prior to its merger with Price Waterhouse. From 1998 to 2001, he was a principal at Whittman‐Hart, Inc. In 2001 he rejoined PwC and was admitted to the partnership in 2006.

Schamp earned a Bachelor of Science in Finance from Butler’s College of Business (now the Andre B. Lacy School of Business) in 1993. He has been a member of the COB Board of Visitors since 2007 and is also a member of the COB Emerging Alumni Group.  In addition to his involvement with Butler, Schamp is a member of the Stanley K. Lacy Executive Leadership Series Class of XXXI and has served on the parish council and finance commission at Immaculate Heart of Mary Catholic Church.  He was a member of Phi Kappa Psi fraternity.

His wife, Meg, also a Butler alumna, earned a Bachelor of Arts in Journalism from the College of Liberal Arts and Sciences in 1992. She was a member of Kappa Kappa Gamma. She has previously been employed with Roche Diagnostics and William M. Mercer Inc. The Schamps have a son and two daughters. 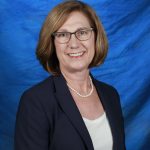 She currently serves as a director for the Wawasee Property Owners Association and serves on the Wawasee Area Conservancy Foundation Ecology Committee.

She received her Bachelor of Science degree in Pharmacy from Butler’s College of Pharmacy and Health Sciences in 1978. She served as a member of the COPHS Board of Visitors from 2003 to 2016. She has been a member of the Alumni Board since 2013 and begins her tenure as President in 2016. As an undergraduate, she was a member of Kappa Kappa Gamma and was Most Outstanding Female Student in 1977. She was recognized as a COPHS Distinguished Alumnus and a “50 under 50” in 2004.

Morris is the daughter of the late H. Raymond “Ray” Swenson, former Dean of Butler’s College of Business and Professor Emeritus.  She lives in Fishers, Indiana, with her husband, Doug, who earned a Bachelor of Science in Mechanical Engineering from Purdue and an MBA from IU-Bloomington and works at Eli Lilly and Co. in forecasting. They have two children.

Tagged with → Aaron Schamp • Andre B. Lacy School of Business • Beth Morris • Butler University Board of Trustees • College of Pharmacy and Health Sciences
Please share it!