While most of Lilly Hall was silent in July, the dance studio Room 310 crackled with the kind of energy and determination that 45 aspiring ballet dancers can bring.

The students had come from 15 states to participate in the first Butler Ballet Summer Intensive, a three-week (July 10-30) pre-professional program where they lived on campus and received intensive training in ballet, pas de deux, character, modern, jazz, and repertoire. 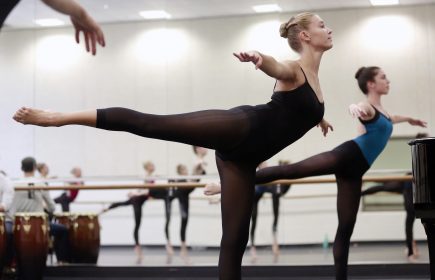 “The idea is to make them excited about Butler Ballet,” said Dance Professor Marek Cholewa, who organized the program. “Not all of them will be coming to our University program, but some of them will. We’ll be able to view them and judge them wisely, especially those who apply for scholarships.”

When students audition for Butler Ballet, they typically come to campus for a day of tryouts and meetings, which gives the Dance faculty limited time to make decisions. Cholewa wanted more time with students to see what they could do. So he recruited Dance Professors Cynthia Pratt and Susan McGuire, as well as his wife, Rosanna Ruffo, an adjunct Professor of Dance, and two other adjuncts, Laura Byram and Jaclyn Virgin, for this summer experience.

The results were everything he had hoped for—he got to work with several promising students and get Butler on their radar for college. The students had a similarly positive reaction.

Lauryn Adams, a 16-year-old high school junior from Atlanta, Georgia, who’s been dancing since she was 4, heard about Butler from a friend who had toured campus. She jumped at the chance to participate in the Summer Intensive program.

“It’s been really nice to dance around different people and be exposed to other kinds of dancers—different bodies, different abilities,” she said. “So I’ve been able to take other people’s corrections that I haven’t heard before and get a new perspective from the teachers. That’s been really nice for me.”

“I’ve learned to nurture myself as a whole person, not just strictly pushing, pushing ballet,” said Good, who is going into her senior year of high school. “I love to do that, but to think about the aspects of a well-rounded person. I’ve learned many corrections about my body and treating it correctly, listening to my body more instead of just ignoring it and telling myself to go.”

Because of the experience, Adams and Good both said Butler is on their list of college choices.

Same with Erica Lohman, 17, who was one of 10 commuters who took part in the program. Lohman, who lives just outside Indianapolis and will be a senior at Mt. Vernon High School in Fortville, said the three weeks was like getting to “test-drive the college.”

She liked what she saw. She found the professors “amazing” and said she came away with better ideas of how her body should work and how to express herself while dancing.

“I loved it,” she said. “I think the campus is cool. I’ve enjoyed getting to see not just the dance part of Butler, but we’ve been able to eat in Atherton and get stuff from the bookstore and so it’s been really fun. I’ve really, really enjoyed everything about this intensive.”